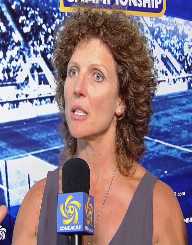 Retired American soccer player Michelle Anne Akers was born on February 1, 1966, in Santa Clara, California, United States of America. She grew up in Seattle, the largest city in the state of Washington. Her superlative skill in playing soccer was first noticed during her high school days. She attended Shorecrest High School. At the school, she earned the coveted title of an All-American thrice during the period of her study there. Michelle grew up to a height of 5 feet 10 inches and a weight of 150 pounds. Such an awesome figure attributed her with a formidable physical presence on the field of soccer. In addition, Michelle's on-field intense aggression and pragmatic attitude equally supplemented her formidable presence.

BLOSSOMING OF HER FOOTBALL CAREER

Michelle evolved her soccer skills playing with neighborhood boys during her pre-teen and teenage years. Consequently, she could sharpen and fine tune the same during her university days. She enrolled at the University of Central Florida upon completion of her high school studies. Her football career took a quantum leap while representing the university soccer team. Besides her selection as four times All-American, she became the all-time leading scorer in the history of the UCF. She earned the University of Florida’s Athlete of the Year award during the year 1988-89. In the same year, she received the Hermann Trophy. The said trophy is awarded annually to the best male and female players engaged in playing college level soccer. She became the first woman soccer player to have received the distinguished award. The University authority later retired the 10 No. jersey she used to wear while representing the university.

Michelle was selected in the 1985 United States women's national soccer team. The team was participating in its first ever international tournament in Italy. She could not play the team’s first game due to an ankle injury. However, she bounced back in the second game. The second game of the match was against Denmark and it was only the second ever international game for the United States. Michelle drew the first blood scoring the all-important first goal for her team. Incidentally, the goal was the first goal of the tournament. It was also the first ever goal by the United States women’s national soccer team in an international tournament. The game with Denmark was eventually drawn with a 2-2 scoreline.

Michelle developed a golden period of her career afterward. She scored 15 international goals for her country in 24 international games played between 1985 to 1990. In the 1991 season, she, in an exceptional display of her scoring ability, scored 39 goals in 26 games which is a team record. She earned the distinction of the ‘Female Athlete of the Year’ for both 1990 and 1991, named by the United States Soccer Federation (UCCF) in recognition of her stupendous achievement in the field of soccer.

Michelle was a key member of the United States soccer team in the 1991 inaugural FIFA Women’s World Cup. China was the host country of the inaugural FIFA Women’s World Cup. She scored a sensational five goals against Taiwan in the quarter-final of the tournament. Thereafter, she went all out in the final scoring both goals for her country in their 2-1 victory over Norway. With 10 goals she was the top scorer of the tournament and hence earned the Golden Boot award. She also received the Silver Ball award as the second-best all-around player of the tournament.

She suffered physical complications due to the continuous exhaustion. The exhaustion was a result of playing aggressive non-stop soccer over a period of time. In 1994, doctors diagnosed Michelle with Chronic Fatigue and Immune Dysfunction Syndrome. In the 1995 FIFA Women’s World Cup, she could not replicate her previous success. Her US team lost in the semifinal to Norway and eventually finished at the third position. A recurrent knee injury plagued her throughout the tournament. She also suffered a concussion early in the tournament.

In the 1999 FIFA World Cup, she again led from the front and won the championship for the second time for her country.

SUCCESS IN THE OLYMPICS

In the 1996 Summer Olympics held in Atlanta, Georgia, her team won the gold medal in women’s soccer. As usual, she played a key role in the success of her team.

She participated in the 1998 Goodwill Games and led her team in winning the gold medal. In the same year, she received the highest honor - the FIFA Order of Merit for her positive contributions to the game of soccer.

Michelle officially retired from playing competitive soccer in October 2001. She had already relinquished her spot in the national team just before the commencement of the 2000 Sydney Olympics.

In 1990, she married professional soccer player Roby Stahl. They eventually divorced in 1994. One of the greatest female soccer players ever, Michelle was named the FIFA Player of the Century in 2002.