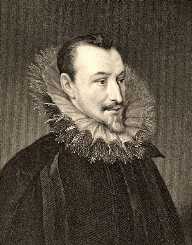 John Donne was a lawyer and cleric for Church of England, who was famous for his poems and satires. He was a founder of Metaphysical Poets.

John Donne was born on 22 January 1572, in London, England. His father John Donne Sr. was a merchant, and his mother was Elizabeth Heywood. John had one younger brother and two sisters who survived infancy. When John Donne's father died in 1576, his mother Elizabeth remarried Dr. John Syminges, who had three children himself, within a few months. His sisters Mary and Catherine died five years later.

John Donne was believed to be homeschooled until he was ten or eleven years old. In 1583, he studied at Hart Hall at Oxford University. After three years, John was accepted into the University of Cambridge for another three years. Due to the requirement, John Donne did not obtain a degree, as he wanted to avoid subscribing to the Thirty-nine Articles, an Oath of Supremacy that defined Anglicanism, as he was a Roman Catholic. John Donne studied law first at Thavies Inn Legal School in 1591, a year later he was admitted to one of the Inns of Court, Lincoln’s Inn, aiming for a diplomatic career.

Both of John Donne’s parents were Roman Catholics, and John was born into the era where Catholics were the minority and illegal. In 1593, John’s brother Henry died of bubonic plague in Newgate prison, imprisoned for harboring a Catholic priest. After the incident, John Donne questioned his faith, and within two years, John changed his faith of Anglican.

John DonneJohn first wrote and published his poems: Satires and Songs and Sonnets during his travels and law school years. After graduating from law school, he went traveling and was in the Anglo- Spanish War. John Donne learned Italian and Spanish during his travel expeditions, returning around 1598. He quickly gained employment as Chief secretary to Lord Keeper of the Great Seal, Sir Thomas Egerton. He lived at his employer’s home in York House. In 1601, his secret marriage to Sir Thomas Egerton’s niece, Anne More resulted in John losing his job and imprisoned for a short time. After proving that the marriage was valid, John was freed and on the charity of friends and family. To support his family, John worked as a lawyer and an assistant pamphleteer to Thomas Morton writing anti-Catholic pamphlets. During his years of strife, he wrote Biathanatos and 17th Holy Sonnet.

In 1610, John Donne published Pseudo-Martyr, arguing that Roman Catholics could support the new King James I, and it would not compromise their religious loyalty to the pope. He followed on with Ignatius His Conclave. King James, I pushed for John to be ordained into the Church of England, which John did in 1615. The same year after he was ordained, John Donne received an honorary doctor of divinity from the University of Cambridge and a role as Royal Chaplain. He was a Reader of Divinity for Lincoln’s Inn beginning in 1616; he went to Germany in 1618 as chaplain to Viscount Doncaster.

John Donne became Dean of St. Paul’s in 1621, a position he held for ten years. During which, John wrote Devotions upon Emergent Occasions after he fell ill. He was made vicar of St. Dunstan- in- the- West in 1624, and later prolocutor to King Charles I. John delivered his famous Death’s Duel sermon, his pre-funeral sermon in 1631 in front of King Charles I.

In 1601, John Donne married sixteen- year- old Anne More, without the consent of her parents. Lord Egerton and father-in-law George More was angered. George did not provide a dowry until later, in 1609. The couple had twelve children; two died in childbirth. Anne died five days after the birth of the last child in 1617. John contemplated suicide when his children and wife died, writing Biathanatos to express his sorrow. In 1623, John Donne suffered fever or typhus. He never fully recovered from the illness, before finally succumbing.