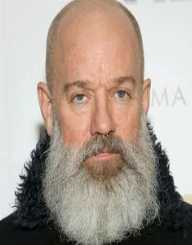 Michael Stipe was born on January 4, 1960, in Decatur, Georgia. His real name is John Michael Stipe, but he prefers to go by his middle name, rather than his first name. He also has a sister named Lynda Stipe, who is also involved in the music industry.

Growing up, the Stipe family moved around, as Michael’s father was in the military. He lived in several states, as well as living in Germany for a short time. As a teenager, Michael Stipe worked at a Waffle House.

As a teenager, Michael Stipe attended the Collinsville High school, which he graduated from in 1978.  Later, he studied. In art at the University of Georgia. While in college, he also studied photography, painting, and other art styles. However, he never graduated from college, as he dropped out to form his band.

In 1980, Michael Stipe had befriended a local record store clerk, Peter Buck. The two decided to form a band together that same year. Michael sang and also acted as the songwriter of the group, writing the lyrics to all of their songs. Peter played guitar. Later that year, Mike Mills (a bassist) and Billy Berry (a drummer) formed the band R.E.M.

In 1981, the band released their first single. By 1982, they had earned enough popularity that they were able to sign a record deal with I.R.S. Records. A year later, the band released their first album, and they produced their next album in the year after that, and their third album a year after that. R.E.M. was shooting quickly into stardom, and there didn’t seem to be a thing that could slow them down.

In 1988, the band left I.R.S. Records for a more prominent label, Warner Bros. Records. The group was inducted into the Rock and Roll Hall of Fame in 2007. From 1980 to 2011, the band produced 15 albums together. However, after their album, "Collapse into Now” the group broke up.

Some of R.E.M.’s most famous albums are listed below.

In December 2014, Michael Stipe came a single music artist. He has only produced two songs in his solo music career as of 2016, In the Sun, and the Rio Grande.

Michael Stipe has a long acting career, but not a lot of acting roles. His music is often used for films, which he is credited for. He also plays himself in both live TV shows like The Tonight Show, and he also voices himself in animated shows like Family Guy.

He has only acted in 5 films, one of which (Rockpalast) he played himself. His other acting roles are listed below.

Michael Stipe has won three Grammys, three Brit Awards, and 2 NME awards for his music. He has also won the PGA Award Vision Award for Theatrical Motion picture and the Independent Spirit Award for the Best First Feature - Over $500,000 for Being John Malkovich for his brief film career.

Michael Stipe is estimated to have a net worth of about $75 million.

In various interviews, Michael Stipe has said that he was attracted to both men and women, even though some claimed that he was gay and strictly into men. A rumor said that he had contracted AIDS from a male partner, but he rejected these stories, as they were completely unfounded.

He did confess to having long-term relationships with men, which could have fueled the rumor, especially since gay and bisexual men were not treated well at the time. Michael Stipe is currently involved in a romantic relationship with his partner, Thomas Dozol.