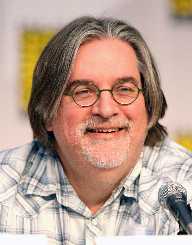 Born in Oregon, Portland on February 15th, 1954, Matt Groening are a sensational cartoonist, producer, voice actor and a writer. He was a student at the Evergreen State College. During this time, he had been identified as a good editor and therefore he was the school’s magazine editor.

In 1973, he moved to Los Angeles after which he sold “Life in Hell” to LA Weekly. This was one of his comic strips that made him get recognized out there. James L. Brooks, a producer, convinced Groening to come up with short story comic books for The Tracey Ullman Show.

It is at this point that The Simpsons came to life. This is the show that Groening is famous for as it earned him several Emmy awards. Later on, in 2009, The Simpsons beat Gunsmoke to become the longest running TV series ever.

Matt Groening was born on February 15th, 1954. He is the son of Homer Philip Groening and Margaret Ruth. Young Groening walked through the footsteps of his father to become a writer and a film producer. These were his father’s career roles back in the day. On the other hand, Ruth was a school teacher.

Born and raised in Portland, Groening attended Ainsworth Elementary School after which he went to Lincoln High School. He attended Evergreen State College for his college studies. While in college, he was the editor of the school’s journal which was called ‘The Cooper Point Journal.’

His cartoonist personality began here as he drew cartoons for this journal. Lynda Barry attended the same college with Groening, and he perceives her as a real inspiration to his career. She is also a famous cartoonist.

After meeting Lynda Barry, Groening's perception on cartoons changed. Initially, he did it for fun and that he was never aware that one day he would get paid for his talent. During their college years, Barry earned a living out of her comic books. She sold them to some newspapers.

Robert Crumb was yet another underground cartoonist that inspired Matt Groening. Shortly after graduating from college, Groening moved to L.A. He was going to work as a mere writer. Things were miserable in the part-time jobs that Groening earned a living from.

Sooner or later, he decided to sell “Life in Hell” to LA Weekly. To his surprise, his comic strip gained nationwide popularity. As a result of the comic release, he also pulled a large string of followers. The comic strip still runs, but it failed to run in LA Weekly in 2009. This is because they could not afford to pay Matt Groening. Nonetheless, other newspapers still publish it.

Birth of ‘The Simpsons’

With the kind of success that “Life in Hell” had, this was a breakthrough in Matt Groening’s career. It raised interests of producers such as James L. Brooks. Brooks wanted to find out whether Groening would be inspired in creating short comics in the show The Tracey Ullman Show.

Well, Groening was interested in the deal and came up with a dysfunctional comic family. The names of his characters were coined from his parent’s and sibling’s names. In April 1987, The Simpsons premiered in The Tracey Ullman Show as agreed. Two years later the show was canceled. Fortunately enough, Simpsons had gained widespread and that they could run a series on their own.

Since then, The Simpsons has been on the air for decades, and it never gets boring considering the popularity it gains regularly. For example, in the 20th-anniversary episode that was released in 2010, it reached over 20 million views. Matt Groening earned some Emmy awards for his comedy show. His most significant achievement was that he beat Gunsmoke to become the longest running TV series ever.

Recently, Matt Groening did another series Futurama, which was to rely on The Simpsons popularity to earn viewership. Unfortunately, the new series was canceled after four years. In 2009, it was revived by Comedy Central, and it later won an Emmy Award for the category of Outstanding Animated Program.

In 1986, Matt Groening tied the knot with Deborah Caplan. The couple had two sons before they divorced in 1999. In 2011, sources claimed that Groening went ahead and married his longtime girlfriend from Argentina, Agustina Picasso.