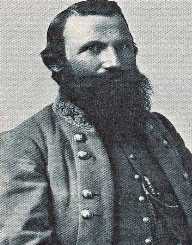 The Virginian United States army officer, J.E.B. Stuart was born James Ewell Brown Stuart on the 6 February 1833 in Patrick County, Virginia on the family farm, Laurel Hill. He was the great-grandson of Major Alexander Stuart who was in the Revolutionary War. And his father, Archibald Stuart, took part in the War of 1812 and was later a U.S. Representative. Stuart, known to his family as Jeb, was the seventh child and youngest son of Archibald Stuart and Elizabeth Letcher Pannill. He had three brothers and six sisters.

J.E.B. Stuart studied at Emory and Henry College (1850) and was then admitted to West Point in New York. At West Point Military Academy, he graduated thirteenth out of forty-six in his class (1854). Two classmates also became major generals in the Confederate States Army: George Washington Custis Lee and John Pegram.

Upon graduating from West Point, J.E.B. Stuart became a second lieutenant in the Regiment of Mounted Rifled and saw action in a campaign against the Apaches in Texas. On the 3 March 1855, he was transferred to the 1st United States Cavalry at Fort Leavenworth on the Kansas frontier. On the 20 December 1855, Stuart was promoted to first lieutenant.

In mid-1857, he was wounded in an exchange with Cheyenne Indians on the Solomon River in Kansas. Then in October 1859, he was appointed a volunteer aide to Robert E. Lee and was sent to Harpers Ferry to control John Brown’s raid. Stuart became a captain on the 22 April 1961.

After Virginia’s secession, J.E.B. Stuart resigned and became a captain in the Confederate army on under the overall command of Robert E. Lee. He saw action in the Shenandoah Valley which resulted in Confederate forces being able to move east. On the 21 July 1861, Stuart was in the First Battle of Manassas where he was involved in a cavalry charge which resulted in the retreat of the Union army.

J.E.B. Stuart was then promoted to brigadier general (September 1861). He was promoted to major general on the 25 July 1862 and took part in the Second Manassas Campaign where he launched a raid on John Pope’s headquarters. In early May 1863, Stuart took part in the Battle of Chancellorsville where Stonewall Jackson and A.P. Hill were both wounded.

Stuart took command of Jackson’s troops and was involved in the defeat of Joseph Hooker’s forces (Jackson’s 2nd Corps 3-6 May 1863). He was in the Cavalry Division until the 9 September 1863 and then the Cavalry Corps until 11 May 1864.

J.E.B. Stuart's Confederate cavalry corps were instrumental in saving Richmond on the 7 May 1864 when holding Spotsylvania Court House against General Ulysses S. Grant’s forces following the Battle of the Wilderness. On the 11 May 1864, he intercepted Philip H. Sheridan’s cavalry at Yellow Tavern, north of Richmond. Stuart was wounded during the battle, and on the 12 May 1864, he died from his wounds at the Richmond home of Dr. Charles Brewer, his brother-in-law. He was 31 years of age.

J.E.B. Stuart married Flora Cooke, the daughter of Colonel Philip St. George Cooke on the 14 November 1855, at Fort Leavenworth. In 1961, his resignation to join the Confederate army led to family disharmony when his father-in-law decided not to follow suit. J.E.B. Stuart is buried at Hollywood Cemetery in Richmond, Virginia. His children were James Ewell Brown Stuart, Jr. and Virginia Pelham Stuart.