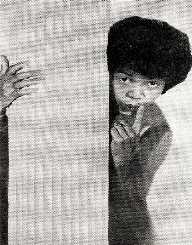 American singer, Eva Narcissus Boyd was known as Little Eva was born in Railroad Street, Belhaven, a rural area in North Carolina on the 29 June 1943. Her mother, Laura Boyd, had thirteen children and Eva was her tenth child. When she was fifteen years old, Eva moved to New York where she enrolled at the high school and lived with relations. To support herself she did domestic work and babysitting. A musician friend found employment for Eva working as a babysitter for Carole King and her partner Gerry Goffin. Both were established songwriters who had hits songs recorded by various artists.

There have been many stories about how the song Locomotion came to be written. Carole King rebuffed these stories by saying that when she employed Eva, she was aware of the fact that the young woman had a good voice and that it would be a matter of time before Eva recorded a King/Goffin song.

Eva’s version of Locomotion was released by Dimension Records and in 1962. The record reached number one on the charts, selling over a million copies and turning gold.

The success of Locomotion propelled Eva to national prominence, and she appeared on television giving dance demonstrations. The record sold well in the UK and 1963, Eva made her first visit. Other songs she recorded include Keep Your Hands Off My Baby, Let’s Turkey Trot and Old Smokey Locomotion. She also recorded a duet with Big Dee Irvin, Swingin’ On A Star which became a top ten hit in the UK.

Eva retired in 1972 and returned home to North Carolina. She re-emerged in the 1990s and did shows nationally and overseas.

Eva had three children, a son, and two daughters.