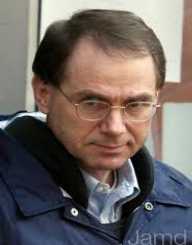 Oklahoma City bombing conspirator Terry Nichols was born on the 1 April 1955 in Lapeer County, Michigan to farmer Robert Nicholas and his wife, Joyce.

Terry Nichols graduated from Lapeer High School (1973).  He then enrolled at Central Michigan University but dropped out in his first year.

Terry Nichols worked with his brother James on the family farm, but it did not work out, so he relocated to Colorado where he obtained a realtor’s licence (1976). He then returned to the family farm before enlisting in the US Army in 1988, at the age of 33. He met McVeigh during basic training at Fort Benning, and they formed a friendship. Both men shared an interest in survivalist training and guns. Growing up on a farm, Nicholas had seen his father using bombs made from fuel and fertiliser to blow up tree stumps.

In 1993, McVeigh moved into the Nichols' farmhouse with Terry and James Nichols. During 1994, Terry Nichols gave up his job on a farm and formed a business with McVeigh selling military surplus and guns. In October 1994, Nicholas and McVeigh stole blasting materials from a Kansas quarry. The following month, he robbed an Arkansas gun dealer and used the proceeds to buy bomb materials.

Between November 1994 and January 1995, Terry Nichols made a trip to the Philippines where his wife and daughter were living. Before his departure, he asked his ex-wife to safe keep letters and instructions for McVeigh, to be accessed if for whatever reason he did not return from the trip.

The Oklahoma City bombing took place on the 19 April 1995, killing 168 people. On the 21 April 1995, Terry Nichols handed himself into Kansas police after hearing that he was being investigated due to his involvement with McVeigh. The FBI accused Nichols of assisting to build the bomb as well as having arranged a getaway car for Timothy McVeigh. His defence attorneys claimed that he was a family man who had not been in Oklahoma City the day of the bombing but at home in Kansas. Prosecutors contended that bomb had been made the day before the bombing.

On the 23 December 1997, Terry Nichols was found guilty on charges of conspiracy to use a weapon of mass destruction as well as eight counts of involuntary manslaughter. He was sentenced to life imprisonment without parole by Judge Richard Matsch on the 4 June 1998. In September 1999, Nichols request for a new federal trial which was denied. Then in September 2001, the Oklahoma County District Attorney announced that Nichols would be facing a state trial for his role in the bombing.

The state trial opened on the 22 March 2004, and Terry Nichols was found guilty on the 26 May 2004 of 161 counts of murder. In June the jury declared that it was deadlocked over a sentence of life imprisonment or death by lethal injection. On the 9 August 2004, District Judge Stephen Taylor sentenced Nicholas to 161 consecutive life terms, without parole.

In March 2009, Terry Nichols filed a lawsuit against the prison he is held in claiming the institution violated his religious and physical dietary needs by not supplying him with whole foods. He asked for 100 percent whole-grain foods, raw fruit and vegetables, and supplements. In February 2010, he went on a fast protesting against prison food, and in August 2010, a judge dismissed his lawsuit.

A grandmother of two of the Oklahoma City bombing victims said in November 2011, that Nichols had written to her apologising for his involvement and that she had been corresponding with him. He had written to her saying that he did not know that the federal building was the target or that it would be occupied.

In 2015, Terry Nichols asked for a court to direct the FBI to return firearms of his that were seized. Federal Judge Richard Matsch ordered the government to destroy the guns in April 2016, and that the proceeds be applied to Nichols court-ordered restitution of $14.5 million. The evidence from Nichols’ state trial is now held in the Oklahoma City National Memorial and Museum.

Terry Nichols' first wife was Lana Osentoski (m.1981-div.1989). He then married Marife Torres (m.1990-div.2003). He had one child Joshua Nichols with Osentoski and two children: Christian Nichols and Nicole Nichols with Torres.