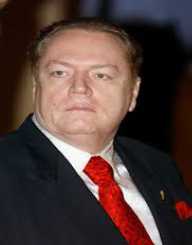 Larry Claxton Flynt Jr. is an American publisher known as the president of the Larry Flynt Publications (LFP). The LFP is famous for the publication of sexually graphic magazines and videos, including Hustler. Born on November 1, 1942, he unsuccessfully ran as a Republican candidate for the US presidency.

Larry Claxton Flynt was born on November 1, 1942, in Lakeville, Magoffin County, Kentucky. He was the first of three children of Edith and Larry Claxton Flynt Sr. His father was a sharecropper and US World War II veteran and his mother a homemaker.

His siblings are Judy who died of leukemia at age four and Jimmy Ray Flynt. Larry Flynt and his siblings were raised in poverty. In 1952, his parents divorced partly because of the death of his younger sister Judy. After the divorce, he moved with his mother to Hamlet, Indiana, but returned to his father two years later because he did not like his mother’s new boyfriend.

Larry Flynt received education at Salyersville High School (currently Magoffin County High School). At the age of 15, he left home to join the United States Army using a fake birth certificate. During this time, he developed an interest in the poker game. Flynt returned to his mother in Indiana, after his discharge from the army.

Returning to Indiana from the army, Larry Flynt worked at the Inland Manufacturing Company, an affiliate of General Motors. He was a casualty of lay off three months due to a union-led slowdown.

After the sack, Larry Flynt moved to his father in Kentucky, where he became a bootlegger but quit when he discovered the police were after him. In July 1960, he enlisted in the United States Navy, becoming a radar operator on USS Enterprise. He was on duty when the ship recovered the John Glenn space capsule. In 1964, he was honorably discharged from the Navy.

With $1,800 of his savings, Flynt acquired his mother’s Dayton, Ohio bar in 1965. He renovated the bar and soon was making $1,000 weekly. He purchased two other bars, with the profit he made. Larry Flynt started opening the Hustler Club, the first in the area to feature nude host dancers, with assistance from his girlfriend, Althea Leasure and his brother Jimmy. He opened venues of the Hustler Club in Toledo, Ohio, Akron, Columbus, Cleveland, and Cincinnati. The clubs became very successful grossing $260,000 and $520,000 annually. With enough money to spend, he purchased the Dayton franchise of Bachelor’s Beat. He operated it for two years and sold it off.

Larry Flynt started the Hustler Newsletter in January 1972. It initially began as a two-page black-and-white publication of his clubs. The content became very popular among his customers, and that motivated him to expand it to a 16-page newsletter by May 1972. By August 1973, Hustler Newsletter was a 32-page publication.

In 1973 the oil crises and the American economic recession affected earnings of his clubs. He, therefore, settled on turning the Hustler newsletters into a sexually explicit magazine with nationwide distribution.

The first of it was published in July 1974. With time, the magazine became very popular but had issues with publications since it was very explicit. In 1975, Larry Flynt purchased pictures of former First Lady Jacqueline Kennedy Onassis having nude sunbath while on vacation in 1971 from a paparazzo. The images published in the August 1975 issue making the magazine gain nationwide recognition.

Larry Flynt and his lawyer Gene Reeves Jr. were shot on the sidewalk in front of 136 South Perry Street in Lawrenceville on March 6, 1978. They were returning to the courthouse for a case on obscenity in Gwinnett County Georgia. Injuries obtained from the shooting left him paralyzed with permanent spinal cord damage. He was retired to a wheelchair, and the pains from the injuries caused an addiction to painkillers. He suffered a stroke due to an overdose of analgesic medications but later recovered. He since had pronunciation difficulties.

A year later, a white supremacist serial killer, Joseph Paul Franklin, claimed responsibilities for the shooting, with reasons that an interracial photo shoot in Hustler angered him.

Larry Flynt has married five times first to Mary Flynt from 1961 to 1965. He then married Peggy Flynt in 1966 with the marriage lasting until 1969. Flynt’s third marriage was to Kathy Flynt in 1970 and divorced five years later.

Larry Flynt then married Althea Flynt in 1976 staying together until her death in 1987. He is currently married to Elizabeth Berrios since 1998. His children include daughters, Theresa Flynt, Tonya Flynt-Vega, Lisa Flynt and a son Larry Flynt. He disowned his Tonya after she became a Christian anti-pornography activist. Tonya in her book Hustled, 1998, alleged his father usually sexually abused her and called her names. Flynt has since denied the accusations.