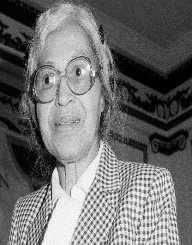 Rosa Parks (1913—2005) was an American civil rights activist, also widely known as "the first lady of civil rights" and "the mother of the freedom movement." She was of African ancestry.

Rosa Parks was born Rosa Louise McCauley, on 4th February 1913 to parents Leona (née Edwards) and James McCauley. Her birthplace was Tuskegee, Alabama. She moved to Pine Level, Alabama,  after her brother was born and her parents separated, residing with Leona’s parents.

Rosa Parks attended Pine Level School until she was eleven, then she went to Montgomery Industrial School for Girls (Miss White’s School for Girls). Rosa studied in Alabama State Teacher’s College High School bud did not graduate as she looked after her grandmother Rose Edwards until her death. Soon after Rose Edwards, Rosa’s mother Leona required care. Hence Rosa did not finish her studies until much later.

In 1932, Rosa married Raymond Parks at the age of nineteen. He was a barber and an active member of the National Association for the Advancement of Colored People (NAACP). With his encouragement, Rosa earned her high school degree in 1933.

When Rosa Parks was looking after her sick mother. She got a job at a shirt factory in Montgomery. After graduation, despite her husband’s reluctance, Rosa became actively involved in civil rights issues by joining the Montgomery chapter of the NAACP. Since 1943, she worked as a secretary for Edgar Daniel Nixon (E. D. Nixon) until 1957. Rosa also served as chapter's youth leader during her time there.

In 1932, Rosa worked several jobs, before working as a secretary, to help her community pay for legal fees for the defense of the Scottsboro Boys: a group of black men falsely accused of raping two white women.

In 1944, Rosa Parks held a brief job at Maxwell Air Force Base, which did not permit racial segregation because it was federal property, it was an eye-opener for Rosa. She also worked as a housekeeper and seamstress for Clifford and Virginia Durr, who eventually helped sponsor her education in Highlander Folk School. Rosa was mentored by the veteran organizer Septima Clark.

After the Montgomery Bus Boycott, Rosa and Raymond Parks moved to Detroit, Michigan in 1957. Rosa became deaconess in the African Methodist Episcopal Church (AME) in 1964. She was working with Congressman John Conyers First Congressional District of Michigan from 1965 to 1988. Her husband Raymond died in 1977. Ten years after his death, she co-founded the Rosa and Raymond Parks Institute for Self Development with Ms. Elaine Eason Steele.

Jim Crow was the name of the racial caste system, it was a series of rigid laws that represented legitimization of racism. In many cases, Jim Crow was aimed at making African Americans second-class citizen. The laws operated in the southern states of America between 1877 until mid-1960s. Even though Passage of the 13th to 15th Amendments to the Constitution had granted blacks the same legal protections general population, the court system supported Jim Crow laws.

In Montgomery, there was a city ordinance that segregated bus passengers by race. The conductors had the power to assign seats, but no passenger would be required to move or give up their positions. But most drivers adopted a practice of running black riders when there are no white-only seats left.

On December 1, 1955, Rosa Parks refused to give up her seat in the bus, resulting in arrest. Following that evening, E. D. Nixon, head of the local chapter of the NAACP, calling for the boycott of the bus system. Montgomery Improvement Association was created to coordinate the boycott, electing Montgomery newcomer Dr. Martin Luther King Jr. as minister of the Dexter Avenue Baptist Church.

The success of the boycott crippled the transit system, while segregationists retaliated with violence. Martin Luther King Jr.'s and Nixon's homes were bombed, while churches were set on fire. Black citizens were arrested for violating an antiquated law prohibiting boycotts. A legal team took to the U.S. District Court for the Middle District of Alabama, Northern (Montgomery) Division.

The Montgomery Bus Boycott officially ended on 20th December 1956, it lasted for 381 days. It became one of the largest and most successful mass movements against racial segregation in history. Rosa Parks was considered as an important part in raising international awareness of the plight of African Americans and the civil rights struggle, her arrest was catalyst of the protest.

Rosa Parks was a fighter for freedom and women’s rights throughout her life. She worked to obtain justice for women. She co-founded Detroit’s Joan Little Defense Committee, to help the 20 year old woman serving a 7 year sentence for robbery, and had killed a white guard who sexually assaulted her. Joan Little became the first black woman in American History to use self-defense against sexual assault in a homicide case, and was acquitted.

In 1967, a riot started in Detroit, Rosa considered housing discrimination a major factor. She collaborated with members of the League of Revolutionary Black Workers and the Republic of New Afrika in raising awareness of police abuse during the conflict. On 30th August 1967, Rosa served on a "people's tribunal" to investigate the killing of three young men by police during the uprising, famously known as Algiers Hotel Incident.

In the 1970s throughout to the 90s, Rosa Parks continued to press for change for equality. She founded Rosa L. Parks Scholarship Foundation for college-bound high school seniors, using most of her speaker fees. Rosa and Raymond Parks Institute for Self-Development was started to introduce young people to importance of civil rights. Despite being in her seventies, she continued to devote energy and time to the causes.

In 1992, Rosa Parks: My Story, was published, her autobiography recounting life in the segregated South. In 1995, she released Quiet Strength, included her memoirs and focuses on the role that religious faith played throughout her life. She had also written Dear Mrs. Parks: A Dialogue With Today’s Youth and I AM ROSA PARKS for preschoolers.

Rosa Parks died on 24 October 2005; she did not have any children. She was survived by her sister-in-law, 13 nieces and nephews and their families, and several cousins.

Rosa Parks received more than forty-three honorary doctorate degrees, and many other awards for her role in freedom fighting. In 1996, President Clinton award her the Medal of Freedom, the highest award given to a civilian citizen. She also was the first living person to be honored with a holiday: Mrs Rosa Parks Day in Michigan, it is the early Monday following February 4th.

Rosa Parks also received Spingarn Medal, the NAACP's highest award, and the prestigious Martin Luther King Jr. Award. She was awarded the Congressional Gold Medal, the most top award given by the U.S. legislative branch, the medal bears the legend "Mother of the Modern Day Civil Rights Movement." She had a comet named after her.