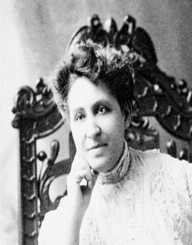 American writer, activist, and educator Mary Church Terrell was born in Memphis, Tennessee on the 23 September 1863. Her parents were both former slaves who became successful financially when freed. Her father Robert Reed Church, due to his business acumen, became the first black millionaire in the South. Her mother, Louisa Ayers, ran her hairdressing salon. Terrell’s parents divorced when she was young and her father later remarried.

Mary Church Terrell was a pupil at Antioch College in Ohio for her elementary education. She enrolled at Oberlin Academy, then at Oberlin College, earning a BA in classical languages in 1884. She followed this up with an MA in 1888. Terrell was the first African-American woman to be awarded a college degree.

Terrell’s first position was teaching at Wilberforce College in Ohio. In 1887 Mary Church Terrell relocated to Washington DC and taught at the M Street Colored High School, later renamed Dunbar High School. She married Robert Terrell in 1891 and had to resign her post as married women were not allowed to work as a teacher in Washington DC in the 1800s.

The lynching of a friend in Memphis in 1892 led Terrell to became a political activist. Thomas Moss had been a good friend, and his death set the course for her future political activities.

Mary Church Terrell got involved in a movement demanding that President Benjamin Harrison speak out against the lynching of Thomas Moss. After President Harrison failed to do so, Terrell she set about organizing the Colored Women’s League in Washington DC. She was also involved in the formation of the National Association of Colored Women and was the first president of the organization. The focus of the organization was to combat via education and community involvement.

As president of the organization, Mary Church Terrell became a public figure both in the United States and elsewhere. When visiting Germany in 1904, she delivered a speech to the International Council of Women in German.

Mary Church Terrell was a member of the Republican Party. She directed a Republican Party programme for black women and also served on their Board of Education in Washington DC (1895-1901).

In 1909 the National Association for the Advancement of Colored People was founded. During the late 1940s, Terrell got involved in the movement to end legal segregation in Washington DC. In 1941 eating facilities were desegregated and in 1954 public schools were also desegregated.

Mary Church Terrell was a prolific writer and as well as social and political essays and articles she wrote short stories and poetry. Her biography A Colored Woman in a White World was published in 1940.

Mary Church Terrell met her husband Robert Heberton Terrell when she was teaching at the M Street High School, and they married on the 18 October 1891 in Memphis, Tennessee. Robert Terrell went on to become the first African-American court judge in Washington DC. The couple had three children; two died young. Their surviving child was a daughter Phyllis, and they also had an adoptive daughter Mary.

Mary Church Terrell died in Annapolis, Maryland on the 24 July 1954. She was ninety years of age.