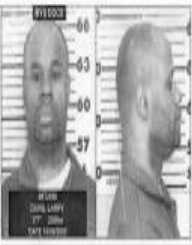 Larry Davis was an American criminal who was accused of the murder of four drug dealers and the attempted murder of nine police officers.

Larry Davis was born in The Bronx, New York City, on May 28, 1966. He was the youngest of the 15 children of Mary Davis. In his teens, he started selling drugs and robbing people’s houses. He was arrested several times before the age of 20. He had a daughter named Larrima.

On November 19, 1986, a team of police officers went to a building on Fulton Avenue in which Davis’ sisters lived. The team consisted of 27 police officers from the NYPD Emergency Service Unit and the Bronx 41st Precinct. They wanted to question Larry Davis for the murder of four drug dealers. 15 of the officers surrounded the buildings and three of them stayed in the hallway. Nine of them entered the apartment of Regina Lewis, Davis’ sister.

After Larry Davis escaped, the police set up stakeouts on all bridges and tunnels leading out of the city. They questioned his mother, his siblings, and many of his associates. They issued a nationwide alarm and the media started reporting on the case. On December 5, Davis entered an apartment in a housing project in The Bronx. The apartment belonged to Elroy and Sophia Sewer, who were inside with their daughter, their friend Theresa Ali, and her son. Davis took the five of them as his hostages while the police surrounded the building. A few hours later, he put down his gun and decided to surrender.

Larry Davis was initially tried for the murder of the four drug dealers from The Bronx. His lawyers stated that he had not committed the four murders. They claimed that the police officers wanted to kill him because he knew some of them were involved in drug trafficking. He was eventually acquitted of the four murder charges.

Larry Davis was sent to the Shawangunk Correctional Facility to serve his sentence. On February 20, 2008, he was stabbed to death during a prison fight. He was 41 years old. The man who killed him was his fellow inmate Luis Rosado.

In 1997, director Sidney Lumet made the film Night Falls on Manhattan, which was inspired by Larry Davis' case. Davis was mentioned on episodes of several TV shows, such as Law & Order, Marvel’s Luke Cage, American Gangster, and Fugitive Chronicles. Rappers such as Meyhem Lauren, Talib Kweli, Kool G Rap, French Montana, and Killer Mike all mentioned Davis in their songs.