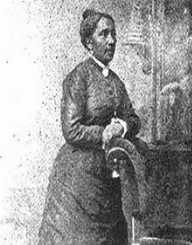 Regular educational seminars called on the need for Africans to create solutions for their own problems. African religious ministers used the pulpit to sensitize their congregations that to God we were all created equal. These values were instilled into her from her childhood. Her progressive parents exposed her to formal education. Graham went to school and graduated with teaching credentials in 1854.

With a desire to help the black children of New York Graham chose to render her services as a teacher. She taught at the African Free School in New York for several years. The school was one of the projects founded to promote the wellbeing of the black communities. It was established by pioneer black slavery abolitionists Alexander Hamilton and John Jay.

Away from school, she was a member of the Abyssinian church in New York. Like most Baptist congregations, the Abyssinian members promoted showcasing of talent within the congregants. Graham was a talented pianist. She had done that since childhood. To the clergy, helping the growth of black talents was another way of alleviating poverty.

In her later years, she opened a kindergarten in New York. the school which operated within her home opened in 1895. She ran it until she died. It was then taken over by the black community in New York.

The public transportation system was unveiled in New York in the early 1830s. Though New York was an abolitionist state, racial segregation was rampant. The state had not drafted any laws to address the issue. Blacks had their own buses which were often not serviceable. If a black person needed to ride on the other coaches, he or she needed permission form the white occupants. If they refused or complained, the conductor would get the black passenger off.

On July 16, 1854, Graham and her friend Sarah Adams boarded a streetcar on the Third Avenue in New York. They were rushing to church for their usual service. The conductor ordered them out of the coach. Sarah Adams obliged, but Graham became adamant. When the conductor failed in his attempts to physically eject her, he sought help. A white police officer arrived and they forcefully threw her off the coach. Graham sustained minor bruises.

She wrote a protest letter which was published by the New York Tribune. The New York black community staged street protests to voice its anger towards the incident. Thomas Jennings, Graham’s father, filed a lawsuit against the railroad company. The complainant was represented by Chester Arthur. Arthur later became the 21st president of the USA. The case was heard and the jury gave its verdict. The court ruled that no New York resident was barred to board any public transport coaches on the basis of race. The railroad company was found culpable in the case. Graham was paid USD 225 in compensation for the injustice done to her.

The ruling was celebrated by the black community. The focus was not on the financial gain that Graham got, but the recognition of the rights of the minority. Though Graham won the case, it took over two decades before racial segregation was totally abolished in New York.

Graham got married to Charles Graham in 1860. They got their son Thomas in 1862. Thomas was a weak and often sickly child. Sadly he died one year after his birth. Charles Graham died in 1867. She never remarried again.

Elizabeth Graham died on June 5, 1901. She was buried in New York. Graham was an educationist and civil rights, advocate. She stood up for her rights as a citizen of the US. Her legacy in educating the black children outlived her through the kindergarten she started.

History does not talk much about her life. But her courage in the face of white dominance prompted the rise of other civil cases in the US. It took another century for Rosa Parks to refuse ejection from a bus in the US.