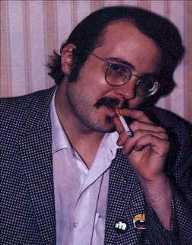 Bun E. Carlos is the widely known and the stage name of the American drummer, Brand M. Carlson. He was born on June 12, 1950. He is the chief setlist and archivist of an American Rock Band named Cheap Trick. The band has recorded most of its shows under the title "Bun E's Bootlegs."

On the side, Carlos has established two other bands together with a former Cheap Trick's bassist Jon Brant. The two bands, The Bun E. Carlo's Experience, and the Monday Night Band are doing well. Carlos, who is left-handed, also has some writing records and he is has done works such as a drum solo track "Who D'King."

Bun E. Carlos was born in Rockford, Illinois.  He grew up in Illinois and developed an interest in music while he was still a young boy. His parents initially named him Brand M. Carlson, but he later adopted his stage name.

When he was born, Carlos became left-handed. He, however, learned to use both hands interchangeably as he grew older. He nurtured his dream and later formed a band that saw him fulfill his career dreams as the original drummer.

Bun E. Carlos started off his career as a drummer when became a member of Cheap Trick Band. He joined as the primary drummer. He also performed other roles in the band such as being the chief setlist and archivist. The band was very successful. They went ahead to even release some of their shows in an album titled "Bun E's Bootlegs." The collection was well accepted in the market, and the band sold many copies.

To net more fortunes, Carlos formed sidebands. They collaborated with a former member of Cheap Trick, Jon Brant to create two other bands: The Burn E. Carlo's Experience and the Monday Night Band.

In 1990's Carlos introduced his line of coffee. He at some point offered a special limited edition of his hand-signed coffee sachets.

Carlos has been a dramatic drummer as he efficiently uses both hands for the job. This capability has boosted his energies and thus helps in better performances. He has indicated in several interviews that this is one of the major factors that has enabled him to establish a drumming empire.

Bun E. Carlos has written several albums. The most notable is "All Shook Up" and "Bun E.in a Box (2004)" that has a drum solo track "Who D'King" which has given him a lot of credits

In 2009, Bun E. Carlos together with other artists formed a band named "Tainted Windows." The other members included Taylor Hanson, former Smashing Pumpkins guitarist James Iha and the Fountain of Wayne bassist Adam Schlesinger. The band was run together with their other main bands. On April 21, 2009, they released their first album.

On March 19, 2010, Cheap Trick relinquished Carlos of his role as the band's touring drummer but remained a member and was received by Daxx, son of the guitarist, Rick Nielsen. This is after he suffered back pain leading to his missing in some of the tours.

In 2011, Bun E. Carlos debuted a band at SXSW, as a form of his project Candy Golde, in Austin, Texas. It had members including Nicholas Tremulis, John Stirratt, and Rick Rizzo. When they started performing live shows, Mark Greenberg, joined the band. They released their 5-song EP which was mastered by Ivan Julian of the Richard Hell and the Voidoids. The EP has four originals and a cover of Paul Simon's "Boy in the Bubble."

The Cheap Trick was inducted into Rock and Roll Hall of Fame on April 4, 2016.

During his career, Bun E. Carlos suffered a back injury that negatively impacted on his career. He has a daughter.

In 2013, Bun E. Carlos sued his fellow Cheap Trick band members arguing that they were sidelining him in band's activities including recording. The members filed a countersuit, and the case was thrown out by the judge. He has publicly admitted that the reason he is at loggerheads with Cheap Trick is that they don't get along with Schlesinger.