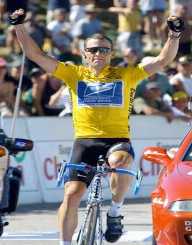 Lance Armstrong has been celebrated for winning the Tour de France seven times.  However, his success turned controversial after losing all titles and being banned from professional cycling for doping.

Lance Armstrong was born in Plano, Texas on September 18, 1971.  His parents divorced when he was two years old.  His stepfather adopted Lance in 1974 and gave him his last name.

Lance Armstrong was an avid participant in sports.  Cycling, as well as swimming, were some of his favorites.  This led to his future as a professional triathlete as early as the age of 16.

Lance Armstrong became the first American to win Classico San Sebastián in 1996.  Thus he became the number one cyclist in the world.

Cancer kept Lance Armstrong out of competition for three years.  When he returned, he did something that no other person had ever accomplished:  he won the Tour de France seven times in a row. From 1999 to 2005, Lance Armstrong surpassed all expectations.  He retired from professional cycling after his seventh win, but return in 2009.  That year he placed third in the Tour de France.

All of the praise and glory came to a crashing halt when he was charged with using performance-enhancing drugs.  The U.S. Anti-Doping Agency made the charge.  After years of being at the top of the sport, he lost his titles and his ability to compete professionally or in the Olympics again.

His reputation took a huge hit.  He denied taking any performance-enhancing drugs and considered the investigation nonsense.  In 2013, Lance Armstrong admitted using cortisone, testosterone, and erythropoietin (EPO) in an interview with Oprah Winfrey.

As his career was gaining momentum in 1996, Lance Armstrong was diagnosed with metastatic testicular cancer.  It spread as far as his lungs, abdomen, and brain.  He survived this disease that could have killed him.

Married Kristin Richards and had three children.  Divorced in 2003.  Dated singer Sheryl Crow for three years after that.  Dated other celebs like Kate Hudson and Ashley Olsen.  Dated Anna Hansen.  She has two kids with him. This was not expected as it was believed he was left infertile after his cancer treatment.

The sales of the bracelets raised funds for cancer research and awareness.  Even though he cannot race professionally, he still promotes cycling and racing through the Lance Armstrong Junior Race Series.