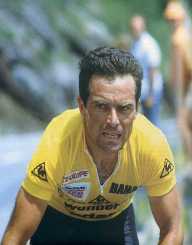 Bernard Hinault was born on November 14, 1954.  He is a former French cyclist. He was a prominent cyclist during the 1970s and the 1980s. He is a five-time winner of the Tour de France. He has won the Tour de France, Vuelta e Espana and Giro d’Italia.

Bernard Hinault was born on November 14, 1954, in Brittany in France. He was born to Joseph who was a farmer and Lucie. He was brought up alongside three siblings, Josiane, Pierre, and Gilbert. He initially did not plan to become a cyclist, but he wanted to become a farmer. He had no interest in studying as he hated school. He also fought a lot with his siblings and other children. He passed his school certificate examinations, and he parents were proud of him, so they gave him a bike as a present. He started cycling the bike with his cousins, and he realized that he wanted to pursue a cycling career.

In 1974, Bernard Hinault started his cycling career when he joined the Gitane team. He was being paid two thousand five hundred francs monthly. In 1976, he led an early victory in Paris Camembert as he maintained a slim lead to the finish. He became friends with Cyrille Guimard who was a former professional cyclist. Cyrille gave him advice on professional issues. He participated in the Vuelta a Espana where he beat many of the favourites.

In 1974, Bernard Hinault married Martine when he was just twenty years old. He was nicknamed ‘The Badger’ throughout his career. He is currently sixty two years old.