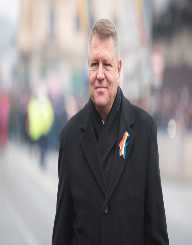 Klaus Werner Iohannis was born on June 13, 1959, in Sibiu, Romania to a Transylvanian Saxon family. He was the eldest child of his parents Susanne and Gustav Heinz Iohannis. His father was a technician, and his mother- a nurse. His family emigrated from Sibiu to Würzburg in Germany in 1992, acquiring citizenship under the right of return by the German nationality law after the fall of the Iron Curtain. However, he later chose to live in Romania.

Iohannis graduated from the Faculty of Physics of the Babes-Bolyai University in Cluj-Napoca in 1983. He began working as a high school physics teacher in various schools in Sibiu. From 1989 until 1997 he worked at the Samuel von Brukenthal Gymnasium in Sibiu, which was the oldest German-speaking school in Romania. He became the Deputy General School Inspector of Sibiu County in 1997 and worked in this position until 2000 when he was elected as the mayor.

Iohannis began his political career in 1990 when he joined the Democratic Forum of Germans in Romania. He served as a member of its board of education in Transylvania. He was also a member of the local party board in Sibiu. In 2001, Iohannis was elected the president of the Democratic Forum of Germans in Romania. A year before that, he was backed as the mayor candidate. Iohannis was elected with 69% vote and won three re-elections in a row.

As a mayor, Iohannis worked to restore the infrastructure of the town and tightened the city administration. He is credited with making the city one of Romania’s most popular tourist destinations, due to the renovation of the old town. In 2007, Sibiu was declared the European Capital of Culture along with Luxembourg.

In 2009, Iohannis was proposed as a candidate for Prime Minister of Romania by the National Liberal Party, the Social Democratic Party and the Democratic Union of Hungarians in Romania. This happened after the motion of no confidence to the Parliament. Iohannis, as an outsider of the national politics, was seen as an independent politician. The mentioned parties subsumed Iohannis as their common candidate for Prime Minister of an interim government, and in October, he confirmed acceptance of this nomination. However, Lucian Croitoru was nominated as the Prime Minister.

The opposition criticized the president of Romania for not designating Iohannis. He was even accused of trying to influence the upcoming presidential elections. In 2013, Iohannis joined the National Liberal Party (PNL) and was elected the First Vice President of the Party. In 2014, his party began procedures to strengthen the political right and merged under the name The Christian Liberal Alliance. In August, Iohannis was chosen as the candidate for presidential election. In the first round, Iohannis received 30,37% of the votes, and in the second round in November, he was elected the President of Romania with 54.43% of the votes.

In his presidential campaign, Iohannis focused on fighting corruption and improving the justice system. He also supported the pro-Western foreign policy. He has also expressed dissatisfaction with the attempted amendments to the Penal Code. He often consults the parliamentary parties on important state decisions. The first round of consultations discussed the political agreement to reach the minimum threshold of 2% of GDP for the Ministry of Defense. The second round of consultations focused on legislative priorities of the parliament.

As a supporter of the fight against corruption, Iohannis has sent several messages of support for investigating sensitive cases against politicians. He remains reticent about the LGTB rights and recognition of same-sex unions in Romania, stating that the country is not yet ready for a definite answer.