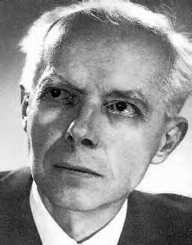 Bela Bartok is widely regarded as one of the greatest composers of Hungary, and also one of the top composers of the 20th Century. Bela Bartok was an exceptional pianist, who founded ethnomusicology and produced masterpieces like Kossuth, the Six Quartets, the Cantata Profana, and the Music for Strings.

Bela Bartok was born as Bela Viktor Janos Bartok to Bela Sr. and Paula on March 25, 1881. His father was the director of an agro school. His birthplace is Sanmcolau Mare, Austria. Bela Bartok was a child prodigy who had outstanding skills with the piano. He displayed his incredible talent as early as the age of five when he could play 40 different piano pieces.

Encouraged and tutored by his mother, Bartok dived into the world of music at a very early age. When he was 7, he lost his father. Bartok had Hungarian and German ancestry.

Recognizing Bartok’s musical genius, his mother arranged for him to study under great artists. Bela Bartok attended the Royal Academy of Music, Budapest from 1899 to 1903.

Bela Bartok was one of the major influencers on the 20th Century music. Originally starting from themes like modernism and romanticism, he shifted his attention to folk music. He collected the best folk elements from around the world and incorporated them into his creations.

In 1903, Bela Bartok produced his first major work, Kossuth, a symphony about the Hungarian revolutionary Lajos Kossuth. Around this time, he came into contact with Richard Strauss, whose music had a profound influence on him. In 1907, he joined the Royal Academy as a piano professor. He taught many famous musicians like Fritz Reiner and Lili Cross.

Bela Bartok composed his only opera ‘Bluebeard’s Castle’ in 1911. It was not well received, however, and despite Bartok’s tries, it remained one of his unpopular creations.

Folk music heavily influenced Bela Bartok by the time the First World War started. He focused more on collecting folk elements from Hungarian, Slovak, Romanian and Bulgarian music. He hardly composed anything. One of his notable compositions of this period was The Miraculous Mandarin.

When Hungary sided with Germany in the World War II, he migrated to the US fearing for his safety. His initial years there were difficult due to the lack of money. With help from some fellow musicians, and his pianist wife, he was able to afford a moderate living after some time, and then conditions improved.

Bela Bartok had ill health from his childhood. He never was fully healthy, and his condition deteriorated in the US. In April 1944, he was diagnosed with late-stage leukemia. After battling for life, Bela Bartok passed away on September 26, 1945, in New York.

Bela Bartok married twice. He first married Marta Ziegler when she was only 16, in 1909. The marriage continued till 1923, and the couple had a son Bela III. In May 1923, three months after his divorce, he married the 19-year-old pianist Ditta Pasztory. The couple remained married till his death and had a son named Peter.