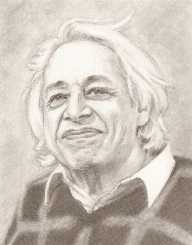 Hungarian composer Gyorgy Ligeti was born on the 28 May 1923 in Tarnaveni, Romania. He was related to Leopold Auer (b.1845-d.1930) who was a famous Hungarian violin teacher, composer, and conductor. Ligeti’s family moved to the Romanian city of Cluj when he was six years old. (Hungary annexed cluj in 1940.)

From 1941 Gyorgy Ligeti trained in music at the Cluj Conservatory as well as with Pal Kadosa in Budapest. During World War II, in 1944, aged twenty, Ligeti was used in a forced labor brigade. His sixteen-year-old brother and parents both were sent to concentration camps. His brother and father died in the fields. After the war, Ligeti recommenced his musical studies in Budapest at the Franz Liszt Academy of Music and graduated in 1849.

After graduating, Gyorgy Ligeti spent some time in Transylvania studying Hungarian folk club before returning to the Franz Liszt Academy of Music as a teacher. Around this time he was exploring the music of a colleague, Lajos Bardos. During the post-war period, when the Cold War began, artists in the Eastern Bloc were cut off from developments in the West. From 1950 Gyorgy Ligeti was a professor at the Budapest Academy. The year 1956 saw the Hungarian uprising which was ruthlessly suppressed by the Soviets. Ligeti escaped to Vienna, Austria, hiding under sackcloth in a train, and remained in Vienna, becoming an Austrian citizen in 1968.

Once in Vienna, Ligeti studied at the Electronic Music Studio in Cologne (1957-1959) and during 1958 composed Artikulation, an electronic work. Apparitions (1959) and Atmospheres (1961) followed. Ligeti's Atmospheres for (1961) is considered by music historians to be his first mature masterwork. Other significant works include Requiem (1965), Lux Aeterna (1966), Ramifications (1969) and Clocks and Clouds (1973). His opera Le Grand Macabre was composed in 1977.

Stanley Kubrick used various pieces of his work for the soundtrack of 2001: A Space Odyssey (1968). Permission was given by Universal Editions, Ligeti’s publisher, without his knowledge. When Ligeti discovered this, he was furious. Kubrick used his Atmospheres as well as the Kyrie from Requiem. Once calmed, Ligeti went on to allow Kubrick to use his music for The Shining (1980) and Eyes Wide Shut (1999) 2001: A Space Odyssey (1968) brought Ligeti’s music to worldwide attention. (Robin Greenberg, Music Historian).

After retiring from the Hamburg Music Academy in 1989, Gyorgy Ligeti devoted his time to revising his opera Le Grand Macabre.