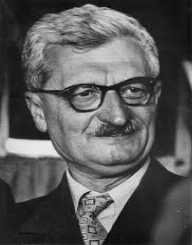 German engineer and physicist Hermann Oberth was born in Nagyszeben on the 25th June 1894 where his father was a medical practitioner. As a child, he became interested in rocket science.

After completing his schooling, Hermann Oberth enrolled at university to study medicine. World War I interrupted his university studies. It was 1919 before he commenced studying astronautics at the University of Heidelberg. In 1922, the university rejected his thesis and long-range rocket design, so in 1925, he published his research under the title of The Rocket into Interplanetary Space.

Hermann Oberth joined the University of Vienna where he worked on rocket development. He published Ways to Spaceflight in 1929. On the 31 May 1931, he launched his first rocket on the outskirts of Berlin, Germany. In the early 1940s, he commenced work at a rocket research station in Peenemunde, working alongside Wernher von Braun and Walter Domberger. The team developed the V2 Rocket, a long-range liquid, fuelled ballistic missile.

He then worked on the development of solid-propellant anti-aircraft rockets during World War II. Oberth relocated to Switzerland at the end of World War II where he worked on anti-aircraft missiles for the Italian government. In 1955, he immigrated to the United States.

Honours include The Hermann Oberth Space Travel Museum in Germany.  The International Air and Space Hall of Fame inducted Oberth in 1980. Other acknowledgements include the Oberth Effect, a crater on the moon and an asteroid.

In July 1918, Hermann Oberth married Mathilde Hummel, and the couple had four children together. Two of their children died during World War II. Hermann Oberth died in Nurnberg, West Germany, on 29th December 1989.