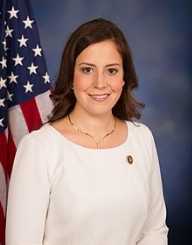 Elise Stefanik is an American politician who is a member of the United House of Representatives of the United States Congress. She was the youngest Congresswoman at her time when she was elected at a mere age of 30. Stefanik represents the 21st Congressional District of New York.

Elise Marie Stefanik was born on July 2, 1984, in Albany. Her parents own the Premium Plywood Products, a wholesale distributor of hardwood plywood and related products in the northern New York region. A Harvard graduate, Stefanik earned a fellowship under the famous presidential adviser Ted Sorensen, who was the legendary speechwriter for U.S. President John F. Kennedy. Post her graduation, she worked under the administration of President Bush, where she looked after the domestic policy matters.

Stefanik gained a wealth of experience working in the office of the most prestigious non-elected employee of the White House – the White House Chief of Staff. She was the policy director for the former Minnesota governor Tim Pawlenty, who campaigned for the Republican presidential nomination. She also worked for Paul Ryan, the Republican Party nominee for Vice President of the United States. Both of the aforementioned assignments were during the build-up to the 2012 Presidential elections.

Stefanik momentarily returned to Albany to lend a hand to her family business. She was initially considered too young to contest for the primary election of the Republican Party.

In the end, Stefanik won emphatically by a margin of 61% votes against Matt Doheny. In the 2014 United States House of Representatives elections which were held in New York, Stefanik defeated both the Democratic and Green Party nominees and became the youngest woman ever to get elected in Congress. Stefanik campaigned on lowering taxes and supporting indigenous small-scale businesses. She also opposed the automatic U.S. military budget cuts in the 2013 budget sequestration.

Although Stefanik has supported her own party’s nominee Donald Trump in the run-up to the U.S. Presidential election, she has also criticized many of his decisions including the travel ban on Muslim countries, withdrawal from Paris climate agreement, etc.

Stefanik married Matthew Manda in 2017. He is a communications and marketing vice president of the consulting firm Firehouse Strategies. She lives in Willsboro in Essex County.