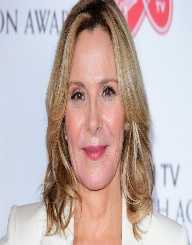 Kim Victoria Cattrall was born on August 21, 1956, in Mossley Hill, Liverpool. Her mother was a secretary, and her father was a construction engineer. The family moved to Canada when Kim was three years old. They lived in Courtenay on Vancouver Island, British Columbia.

When Cattrall was 11 years old, she returned to England, because her grandmother had become ill. During her time in England, she attended lessons and took examinations at the London Academy of Music and Dramatic Art. Cattrall returned to Canada in 1972, where she finished high school.

After graduating from high school, Cattrall went to New York City and enrolled in the American Academy of Dramatic Arts. When she graduated, Cattrall was offered a five-year film contract with the director Otto Preminger. Her film debut was the 1975 film Rosebud. Just a year later, her contract was bought out by Universal Studios. She was then cast in many television roles, for example, the 1977 episode of Quincy, M.E.

In 1978, Cattrall appeared in her first lead role in the episode of Columbo. She also starred in the 1970s show Starsky& Hutch. Cattrall began to earn widespread recognition, especially after appearing in the 1970 film The Incredible Hulk. In 1980, Cattrall starred in the film Tribute and the same year in a drama Crossbar.

Throughout the 1980s, Cattrall continued to appear in numerous television shows. She portrayed a P.E. teacher in Porky’s and had a role in the Police Academy. One of her best-known films of this period is the 1986 film Big Trouble in Little China. Cattrall gained critical acclaim and praise from the audiences for her role in 1987 film Mannequin. She was also cast as Lieutenant Valeris in Star Trek VI: The Undiscovered Country.

Cattrall’s biggest role came in 1997 when Cattrall was cast in Darren Star’s series Sex and the City. Her role as Samantha Jones made Cattrall and international star. After gaining popularity, Cattrall also earned commercial contracts with companies like Pepsi. Cattrall later appeared in both Sex and the City films. Her role as Samantha Jones earned Cattrall five Emmy Award nominations and four Golden Globe Award nominations. She won a Golden Globe award in 2002.

Besides her on-screen career, Cattrall has also performed as a stage actress. She played the role of Claire, a paralyzed woman in the West End drama Whose Life Is It Anyway?. In 2006, she appeared in The Cryptogram at the Donmar Warehouse in London. In 2010, she began a run at the Vaudeville Theatre as Amanda, in the play Private Lives. In 2012, she starred in the production Antony and Cleopatra as Cleopatra at the Playhouse in Liverpool.
In 2013, Cattrall starred in the Sweet Bird of Youth. Her latest stage role has been in the play Linda by Penelope Skinner. The play is produced at the Royal Court Theatre in London. However, she was forced to drop out just a few days before opening due to health issues. She was suffering from insomnia, but after recovering, Cattrall went on to perform in the play.

Cattrall has both British and Canadian citizenship. There were rumors that she obtained American citizenship in 2008, but Cattrall later denied it. In 2009, she took part in the reality series Who Do You Think You Are? and learned that her grandfather George Baugh left his family and bigamously married his second wife. He had four children with her.