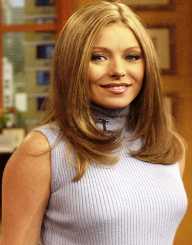 Kelly Maria Ripa is a TV show host and an American Actress. She is as well, known as an incredible dancer and television producer. Kelly’s remarkable role was seen in an American TV series called All My Children. Live! With Kelly is a morning talk show that Ripa serves as a co-host. Hope & Faith was also an ABC sitcom that Ripa played an incredible role as Faith Fairfield. It wasn’t so long that he was nominated as the Most Powerful Media Personality.

Charming, attractive and loving are one of the pinnacle traits for this noble lady, Kelly Ripa. Her fashion sense is admired far and beyond. Having more beautiful things is something that Kelly cherishes. She takes pride in her personality and more so appearance.

Her sensitive nature gives her a chance to pay more attention to every bit of detail that concerns her. Being focused is a noble course for her, hence paving the way for loads of opportunities.

Kelly Ripa might not be so reluctant to save the whole world, but she makes sure she has made a positive impact on her family and friends. When not busy, Kelly takes time to work out and take care of herself. Overall, she is an orderly and risk-free persona.

Kelly Maria Ripa was born on October 2, 1970, in New Jersey, Stratford, United States. She was born to Joseph Ripa who served as a bus driver and a trade union president. Her mother, Esther was a devoted homemaker. Throughout her childhood life, Kelly impersonated different characters as her dream was to become a profound actress in future.

At 19 years of age, Kelly Ripa joined a ballet dancing group. In the process, she got a chance to join Dance Party USA. At some point, she joined Camden Community College located in New Jersey where she performed in local theatres. It was in 1990 that she was seen on an ABC drama called All My Children.

Lucky for her, the first drama was received well with the audiences. As a result, she won an award in 1993 for being Best Supporting Actress. In 2001 Ripa teamed up with Regis Philbin where they both co-hosted a morning show called Live! With Regis and Kelly.

It first started as a temporary affair, but soon she took a permanent position for Kathie Lee Gifford. Regis and Kelly’s personality blended perfectly. Philbin retired in 2011 and Kelly took all roles in the morning show. Soon it was changed to “Live! With Kelly.” In 2012 she was granted an Emmy Award.

Other than Television work, Kelly Ripa has also appeared in countable of movies and series. In 1996 she was featured in Marvin’s Room movie, Hope & Faith, Fly Me to The Moon, Damages, and Broad City and so on. Still the same year she received Best Actress Award during the NY International Independent Film Festival.

Kelly Ripa has also worked as the spokesperson for different brands including TD Bank, Tide, and Pantene. She is currently working as an ambassador for Ryker and Electrolux. In 2007 Kelly and her loving husband, Mark launched a production company.

In 1995 Kelly Ripa married a co-actor of ‘All My Children,’ Mark Counsuelos. The duo has three children called Michael, Lola, and Joaquin. They have been married for twenty years and still happy with each other.