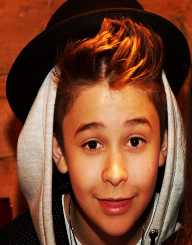 Leondre Antonio Devries also known as Bars is a British Rapper born on October 6th, 2000.  He became third in the 2014 Britain’s Got Talent. He was with his duo band Bars And Melody also known as BAM with him as bars. Melody, on the other hand, was Charlie Lenehan.  During their auditions for the show, they received a golden buzzer. The head judge of the show Simon Cowell was so impressed by the duo and honored them with a golden buzzer. Being part of the show made the two friends famous all around the world. According to Devries, singing helps him overcome tough situations. As a kid, he was bullied a lot and would always drown his sadness in his songs.

Leondre Devries is quite a lovely person. When he is not singing, he loves playing with his friends just like any other teenager his age. He has toured many countries including the United Kingdom, Australia, Japan, mainland Europe and the United States

Leondre Devries met his friend Charlie Lenehan on Facebook in September 2013. Five months after their online friendship, they auditioned together in the 2014 Britain’s Got Talent. The show would then lead them to their fame and great success in their singing career. At the auditions, Simon Cowell was quite impressed by their performance and rewarded them with a golden buzzer. This was an automatic ticket to the semifinals of the show. The other judges were equally impressed so did the audience at the show. His story at the auditions was quite an emotional one.

He narrated how at school older kids used to bully him. He would then write songs and bury his sadness in these songs. At the auditions, they sang a semi-original song that Leondre Devries had written. He combined his lyrics with the song “Hope” by Faith and Twista.

Leondre Antonio Devries was born a singer. He became famous at early stages of his career when he was still a boy. The turning point of his career came especially in his auditions at the 2014 Britain’s Got Talent. His performance with Charlie throughout the show eventually earned them the third position in the finals. He moved the crowd to tears during the auditions. This was a huge success for them. Since then the duo has never looked back. They have recorded a series of songs.

In July 2014, Bars and Melody released the song “Hopeful.” It was produced by Syco recording label owned by Simon Cowell. The song became quite a hit. It was even ranked position five on the UK Singles Chart.  The song was also aired in many Television shows including This Morning and This Morning

Their next single premiered in February 2015 with the title “Keep Smiling.” Subsequently, they released “Stay Strong” which became their third single song. They have since then released other songs.

Is only sixteen but acts more mature than other teenagers his age. This is what makes him such a special individual. Leondre Devries comes up with his songs based on his own life experiences.  his song creates many emotions to its viewers. He loves bowling, paintballing and go-karting during his free time. He also loves watching movies and playing with his friends. He lives a life just like any teenager his age though he has a high maturity level.