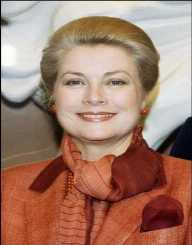 Kelly Marie Monaco is an American actress known for her role as Sam McCall in the ABC soap opera General Hospital. Born on May 23, 1976, she also adds model and reality television personality. Monaco won the maiden season of the television reality competition, Dancing with the Stars with professional partner Alec Mazo in 2005. From 1997 to 2003, she played the role of Livvie Locke in the soap opera Port Charles. In April 1997, she was the Playboy “Playmate of the Month.”

Kelly Marie Monaco was born to Albert "Al" and Carmina Monaco on May 23, 1976, in Philadelphia, Pennsylvania. She is the third child of five with siblings including Christine, Marissa, Carmina, and Amber. The family later moved to Poconos where Monaco received education from the Pocono Mountain High School. She started with acting classes while there. As a teenager, she was also interested in sporting activities. Monaco worked as a lifeguard at a local resort soon after graduating from school. Monaco continued her education at the Northampton Community College spending two years there.


A Career in The Entertainment Industry

Kelly Marie Monaco started a professional career in modelling with Playboy. It all began when she sent a photo to the magazine. In April 1997, she became the Playmate of the Month. She has since featured in several Playboy Special Editions. This landed her a role as Susan in the television drama Baywatch from 1997 to 1998. Monaco also played the body double of Carmen Electra sometimes since Electra could not swim. Afterwards, she played minor roles in BASEketball, 1998, Idle Hands, 1999 and Mumford in 1999.

Kelly M arie Monaco competed in the first season of the ABC reality television show, Dancing with the Stars alongside her professional partner, Alec Marco. She had it very tough at the beginning of the show with several criticisms from the judges, but she was able to come up strongly to become the shows, first winner. She returned to the show’s 15th season with professional dancing partner Valentin Chmerkovskiy. This time she was placed 3rd at the end of the show.

Kelly Marie Monaco was the co-host of the 33rd Daytime Emmy Awards in 2006 alongside Tom Bergeron. In 2009, Donald Trump and Paula Shugart selected her to be one of the judges of that year’s Miss USA. In 2011, she starred in the TV series Dirty Soap.

Kelly Marie Monaco met Mike Gonzalez while in high school and started dating. After school, the two worked as lifeguards in a local resort. They also went to the same community college. Monaco and Gonzalez broke up in 2009 after an 18 years relationship. She has hearing impairment caused by scuba diving complications.

Kelly Monaco is involved in charity works and visited Kenya in 2009 as part of a Feed the Children program. The team visited schools and orphanages built by Feed the Children for food supplies. As part of the iParticipate campaign on October 29, Monaco and other co-stars of General Hospital volunteered in a school beautification program in Los Angeles. That same year she was robbed at her Planet Hollywood Resort and Casino apartment.