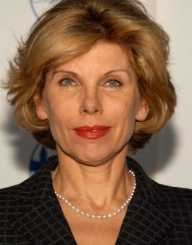 American actress, singer and producer Christine Jane Baranski, known for her achievement of being nominated 15 times for the coveted Emmy Award, was born on May 2, 1952, in Cheektowaga, Buffalo, New York. She hailed from a Polish ancestry, and her grandparents were actors in Polish Theatre. Her father Lucien Baranski was the editor of a Polish newspaper published from Buffalo. Her mother’s name was Virginia Baranski. Since her early childhood, she had the opportunity to see the performance of her grandparents at the local Polish theatre. Her parents also were active participants in the local choruses. All these factors had their influence on Christine. She was drawn towards stage acting from an early age. She also took her ballet dance lessons seriously and developed a liking for the same.

Christine Baranski attended the Villa Maria Academy, a high school in Cheektowaga, a Buffalo suburb. Her acting prowess was noticed during her sophomore year of high school and was excelled and sharpened by the drama coach of the school, who was a retired opera singer from Austria. After her high school graduation, she came to the New York City and attended the Juilliard School famous for its drama division. She graduated from the school in 1974 and received a degree of Bachelors in Arts.

Christine Baranski started working as a full-time actress during her Juilliard School days and made her Broadway debut in ‘Hide & Seek’ in 1980. She also made her Off-Broadway debut in the same year in ‘Coming Attractions’ at Playwrights Horizons. She was a regular feature in the Off-Broadway productions of Manhattan Theatre Club since her debut appearance in ‘Sally and Marsha’ in 1982. In her next Broadway appearance in Tom Stoppard's ‘The Real Thing,’ she received the 1984 Tony Award as Best Featured Actress in a Play.

Among her other notable performances in Broadway are ‘Hurlyburly’ (1984), ‘The House of Blue Leaves’ (1986), ‘Rumors’ (1989) and ‘Boeing Boeing’ (2008). She won her second Tony Award, again in the category of Best Featured Actress in a Play, in 1989 for her performance in ‘Rumors.’ She won the 2003 Helen Hayes Award for Outstanding Actress in a Musical for her portrayal of Mrs. Lovett in ‘Sweeney Todd’ in 2002 which was staged at the Kennedy Center in Washington D.C. In 2006, she played the title role in ‘Mame’ staged at the same venue.

Christine Baranski made her television debut in short-term roles on various daytime soap operas. Prominent among these are the likes of ‘All My Children’ and ‘Another World’. She also had some guest appearances to her credit including shows like ‘The Equalizer’ and ‘Law & Order’ during this time. Her first serious full-time television appearance happened when she landed her first recurring primetime role as the hard-drinking Maryann Thorpe, a friend of the titular character Cybill Shepherd in the CBS sitcom ‘Cybill’ in 1995. The show continued till 1998 and Christine earned an Emmy Award for Best Supporting Actress in a Comedy and also a Screen Actors Guild Award for it.

Post Cybill, Christine Baranski appeared on some major television shows like ‘Welcome to New York,’ ‘Ugly Betty’ and ‘3rd Rock from the Sun’. She was seen in the NBC sitcom ‘Happy Family’ during 2003-2004. Appearing as a guest artist, her characterization of Dr. Beverly Hofstadter, a dispassionate psychiatrist and neuroscientist and an extremely analytical mother of one of the protagonists Leonard Hofstadter in The Big Bang Theory, earned two Emmy Award nominations.

In 2009, she started portraying the character of Diane Lockhart, senior law partner and powerful attorney of a Chicago law firm, in the CBS drama series ‘The Good Wife.’ The show continued till 2016, and she earned six consecutive Emmy Award nominations for the first six seasons of the series in the category of Outstanding Supporting Actress in a Drama Series.

She showed her singing talent in the 2002 musical ‘Chicago’ as well as in the film adaptation of Stephen Sondheim's ‘Into the Woods’ (2014). She played the role of a journalist in Chicago and the wicked stepmother of Cinderella in Into the Woods.

Christine Baranski married actor Matthew Cowles on October 15, 1983. They remained unseparated until Cowles’ death on May 22, 2014. They were blessed with two daughters, Isabel and Lily.