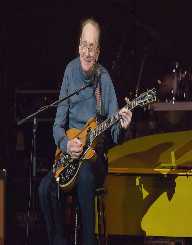 Lester William Polsfuss was born on 9th June 1915, to George and Evelyn Polsfuss. He was born in Wisconsin, United States.

Les Paul was performing on a semi-professional basis by the time he was 13. His genre was country music, and he performed as a singer and guitarist. Paul performed locally at roadhouses and drive-ins, but in a quest to be louder so he could be better heard, he experimented to amplify his acoustic guitar.

Les Paul was still a teenager when he created his first solid-body electric guitar. He adapted a piece of wood that he collected from the local train line. He dropped out of high school when he was 17, as he had teamed up with a band in St. Louis, Missouri.

In 1934, Les Paul moved to Chicago. He continued performing on radio, and in 1936 released his first two albums. It was during this period that his stage name, Les Paul, was born.

Les Paul  formed a trio with Jim Atkins and Ernie Newton in 1937, and in 1938 they left Chicago and moved to New York where they had been given a regular spot on one of the radio shows.

Les Paul began experimenting at this stage, because he wasn’t happy with the sound of acoustic-electric guitars.

He had his first solid-body guitar in 1941, but when he took it to Gibson, they weren’t interested. A competitor, Leo Fender, came up with a similar guitar, and already had it mass produced. It took Gibson ten years before they decided to work with Paul, and came out with the guitar called the Gibson Les Paul. Even to this day, it is the preferred guitar for many a rock artist. Musicians like Paul McCartney, Eric Clapton, and Keith Richards have made the guitar one of the best-selling and most popular. Although Paul’s guitar was ready some years before Fender’s, because the Fender guitar was commercially produced first, he tends to get most of the credit for the solid-body guitar.

Les Paul  continued to perform with his trio, but when the first Jazz at the Philharmonic concert was on in Los Angeles in 1944, Paul was a late inclusion, and played with Nat King Cole, amongst others.

The trio also performed on Bing Crosby’s radio show in 1944. Crosby recorded on several occasions with Les Paul , and also sponsored Les Pauls  recordings. In 1946, the trio toured with the Andrews Sisters, as the opening act.

Not only was Les Paul  a master guitar player, but in 1945, with help and encouragement from Bing Crosby, Les Paul  built a recording studio at his home in Los Angeles. Once again, not satisfied with the norm, Les Paul began experimenting, and by 1948, he was doing 24-track recordings.

Les Pauls  career came to a stop in 1948, when he was in a serious car accident. His right arm was shattered. The doctors told Les Paul they were unable to repair his elbow, and their solution was amputation. Les Paul  asked to have his arm set at an angle that would allow him to play the guitar again. The doctors did the setting as requested, but it took Paul over a year to recover from the setback.

In 1961, Les Paul  ended his association with Gibson. They had made modifications to the Gibson Les Paul  without any consultation, and Les Paul  first saw the guitar in a shop window. He requested that the name of the guitar be changed to the Gibson SG. Some years later, in 1966, Les Paul  resumed his relationship with Gibson, and his guitar remains popular up to this very day.

As well as his instrumental and recording inventions and work, between 1945 and 1961, Wesley SneijderLe
Les Paul

release around 55 singles, and 40 albums. Some of the albums were collaborations with other well-known musicians performing with him.

Les Paul received many honors and awards throughout his life, including the following:

Les Paul married Virginia Webb in 1938, but the couple divorced in 1949. They had two children together, Russell and Gene.

Les Paul then married Colleen Summers, a singer from Gene Autry’s band, in 1949. Her name was changed to Mary Ford, and Paul and Ford recorded many hits together, and had their own television show through the 1950s. The couple divorced in 1964, when Ford became tired of the constant touring.

During their marriage, they had a son, Robert. Before Robert, they also adopted a little girl called Colleen.

Les Paul founded the Les Paul Foundation in 1995, but it wasn’t to start operating until after his death. The Foundation is to carry on the legacy of Les Paul, by supporting musical education, medical research, and engineering.