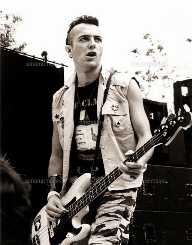 Joe Strummer was born on August 21st, 1952. His birthplace was in Ankara, Turkey. He was a British artist known for his exceptional skills in singing, songwriting, and acting. He is also remembered for being one of the founders of a punk rock band called the Clash. His father was a British diplomat. After Strummer gained an interest in music, he changed his name to mark the beginning of a new career. His new band, the Clash went on to release hit songs which made its members famous. However, they separated in 1986. Joe Strummer passed away on December 22nd, in 2002. He passed away at the age of 50.

John Graham Mellor alias Joe Strummer was born on August 21st, 1952 to Anna Mackenzie and Ronald Mellor. His mother was a nurse by profession who was raised from humble beginnings as his parents were crofters. His father was an Indian native and that he worked as a Foreign Service diplomat for the British. When Strummer was still a toddler, his parents used to move from one place to the other. Some of the places that his family lived in include Cairo, Egypt; Bonn, Germany and in the city of Mexico. Ultimately, the family settled down in Surrey, London.

It was after settling down that Joe Strummer enrolled at the City of London Freemen's School where he boarded. Schooling in a boarding school meant that he spent minimal time with his parents over the seven years he was studying at the institution. While in school, his early inspirations for rock 'n' roll began. At this time, he was a huge fan of Chuck Berry, Captain Beefheart, and Rolling Stones. He was also a big fan of Woody Guthrie, an American folk musician. Strummer adopted the name Woody during this period.

After completing his high school studies, Joe Strummer joined the Central School of Art and Design in 1970. Here, he tried developing an interest in being a cartoonist. Seeing that this was not what he was destined to do, he went back to music and acting. Rock music was soon part of his daily life, and this affected his educational performance. In 1974, he came up with his first band and called it The 101'ers. A year later, the band landed their first performance at Elgin's Pub. Considering he had a new way of playing his guitar, Strummer again changed his name to his famous stage name –Joe Strummer.

At the beginning of the year 1976, Strummer’s band would play alongside The Sex Pistols. Its band members were impressed continuously by Strummer’s musical talent. This prompted them to approach him requesting him to stand as the lead singer for their band. Soon, Strummer left his old band and partnered with the likes of Paul Simonon, Terry Chimes, and Keith Levene. Their new collaboration came up with a new band, The Clash. Their first appearance as a new band was in July the same year performing in Sheffield.

In 1977, the Clash signed a contract with CBS Records. Mick Jones and Joe Strummer mainly composed the band's songs. These songs featured political subjects or occurrences, cultural indifference, social injustices in the society, repression and the motivation to have a strong military. Their unique band focus made them be inducted into Rock and Roll Hall of Fame. Some of the songs that were a major hit from the band include "White Riot," "I'm So Bored With the U.S.A.," and "London's Burning."

Apart from being a celebrity in the music arena, Joe Strummer also went on to feature in some films such as Rude Boy-1980, Walker-1987, Straight to Hell-1987, Candy Mountain-1988, I Hired a Contract Killer-1990 and several others.

Joe Strummer got married for the first time to Pamela Moolman. This marriage gave Strummer the advantage of earning his British citizenship. He also entered into a romantic relationship with Gaby Salter that lasted for more than a decade. He had two girls with Salter namely, Lola and Jazz. After this affair, Strummer wedded Lucinda Tait in 1995. They lived together until he passed away.

Joe Strummer passed away on December 22nd, in 2002. He suffered a cardiac arrest which led to his death at the age of 50.