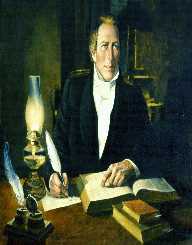 Joseph Smith was born on December 23, 1805, in Sharon, Vermont, USA. His parents were Lucy and Joseph Smith.

Joseph Smith did not have a formal education, but he was self-taught and taught by family members how to read, write, and do basic mathematics. He spent much of his free time reading books on various subjects so he could educate himself. When he was not busy burying his nose in a book, he helped out on his family farm.

As a teenager, Joseph Smith started to question his religious beliefs. He knew he was a Christian, but he did not know which of the Christian churches he should join. He later went into the woods to pray on it, and he claimed to have been visited by God and Jesus, who told him not to join any of the existing Christian churches. About three years later, he claimed to be visited by the angel Moroni, who disclosed the location of golden plates which held a detailed record of Jesus’s time in the Americas. In 1827, he found these plates and translated them into English, but it was not until 1930 that he published his translation, which he called The Book of Mormon.

Soon after publishing his religious book, he went on to found the Church of Jesus Christ of Latter-day Saints, which many people now call the Mormon church. Smith then appointed himself as the first president of this church.

Only a few years after Smith’s church was formed, in 1938, the governor of Missouri (Lilburn W. Bogg) sent out an order to exterminate all Mormons. Soon after, mobs went after the Mormons, killing over a dozen Mormons, and harming about the same amount. In 1839, Joseph Smith moved to the small town of Nauvoo, Illinois, USA, where he continued to preach his new religion. Many of his followers moved to this same town, which rapidly expanded the town’s population.

In 1939, Joseph Smith began his campaign to become the next president of the United States. He was mostly motivated by reinforcing the right to religious freedom which was promised to all Americans in the Constitution. His religious rights had been infringed on when Mormons were killed simply for just being Mormons. Smith began by talking to the president at the time, Martin Van Buren, to discuss his concerns, but the president did not do anything to address his concerns, as he thought it would hurt his approval rating.

Joseph Smith then tried to rally support from voters on the east coast. He soon began officially running for president in an independent third-[party. However, he was sadly murdered before he could complete his campaign.

Joseph Smith married Emma Hale in 1827. Together, this couple had ten children and adopted two more. Sadly, only five of their children lived to become adults.

In June 1844, Joseph Smith and his brother, Hyrum, travel from Nauvoo to Carthage, Illinois. While traveling, they were arrested for treason and imprisoned at the Carthage Jail. Joseph Smith died on June 27, 1844, in Carthage, Illinois, USA. He was only 38 years old when he was murdered because of his religious beliefs and polygamist lifestyle.