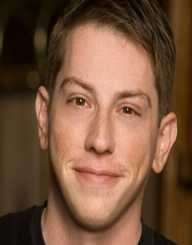 Seth Grahame-Smith is an American author, screenwriter, and producer whose uptake on Jane Austen's work with a twist catapulted him to fame.

Grahame-Smith is married to a woman named Erin. Together, they have two children named Joshua and Jacob where they currently reside in their home in Los Angeles, California.

Seth Grahame-Smith was originally born as Seth Jared Greenberg but his mother renamed him to Grahame after Kenneth Grahame, the author and later his mother remarried hence the addition of Smith to his name. He was born on January 4, 1976, in Rockville Centre, New York to parents Deborah Ann and Barry Michael Greenberg.

Growing up, he spent his time in Bethel, Connecticut where he studied at the neighboring Bethel High School but later attended Episcopal school after his parents divorced and his new father was Jewish. Grahame-Smith's attachment to literature was profound since his father worked as a rare books dealer whereas his mother worked as a literary editor.

Upon graduating high school, he pursued a career in film by enrolling in Emerson College where he graduated in 1998.

After completing his degree in Emerson, he relocated to Los Angeles where he found work as a producer and writer. His early work was a show called History's Mysteries but later on, dropped the post since he realizes he would much rather be the one selling stories and thus he pursued freelance writing.

He attained commercial success in 2009 due to his uptake on the literary classic of one of Jane Austen's most popular work but with a twist which resulted to his phenomenal work entitled Pride and Prejudice and Zombies. His work sold over 1 million copies across the globe and translated to 20 languages. A film was adapted to the same name which was released in 2016 lead by Sam Riley and Lily James.

In 2010, he ventured into TV series where he worked as both director and writer at MTV's The Hard Times of R. J. Berger which ran for 2 seasons.

Prior to  Pride and Prejudice and Zombies, he hit media success with his work on Abraham Lincoln: Vampire Hunter in 2010 which was later turned into film 2 years later in 2012 starring Benjamin Walker and Dominic Cooper.

In 2012, he turned to screen-writing where he manhandled the works on Tim Burton's Dark Shadows starring veteran actor Johnny Depp.

If he's not writing, producing, or directing, Grahame-Smith turns to read during his free time wherein he stated that he enjoys reading nonfiction history and biographies.