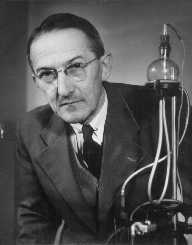 American chemist and Nobel laureate Donald J. Cram was born on the 22 April 1919 in Chester, Vermont in the United States. His father was Scottish and his mother of German ancestry. His parents met and married in Ontario, Canada and relocated to Chester, Vermont before the birth of Cram, their fourth child, and only son. When Cram was two years old, the family moved to Brattleboro, Vermont. His father was a former cavalry officer, lawyer, and farmer who died of pneumonia when Cram was four years old.

Donald J. Cram studied for the twelfth grade at Winwood High School, a small private school on Long Island, New York. He also worked to pay for his tuition and board. During his time at Winwood, he did a chemistry course, taught himself geometry and even won a four-year scholarship to Rollins College.

Cram graduated with a B.S. degree from Rollins College in Florida (1941) and then obtained an M.S. from the University of Nebraska (1942). During World War II he worked as a research chemist at Merck & Co where his research involved the chemistry of penicillin (1942-1945). After the war, he obtained a National Research Council Fellowship which enabled him to do his doctorate under the supervision of Louis Fieser at Harvard University. Cram was awarded his Ph.D. in 1947.

After being awarded his doctorate in 1947, Donald J. Cram spent a few months at MIT working under Professor John D. Roberts as an American Chemical Society Fellow. He was then offered a position of Assistant Professor at the University of California in Los Angeles. In 1957 he was made a full professor, and in 1985 he was the inaugural Saul Winstein Professor of Chemistry at UCLA.

Cram was highly regarded as an academic and lecturer. During his career at UCLA, he taught organic chemistry to thousands of undergraduates. He also co-authored an essential textbook with George Hammond which revolutionized the teaching of the subject. Cram oversaw the doctorates of over 120 students and a hundred postdoctoral. He also produced seven books and over four hundred papers.

Also during his time at UCLA, Cram’s research created the field of host-guest chemistry for which he won the Nobel Prize in Chemistry (1987) along with Charles Pedersen and Jean-Marie Lehn.

Donald J. Cram was made a member of the National Academy of Sciences in 1961. He received many other awards and accolades including the ACS Award for Creative Work in Synthetic Organic Chemistry (1965), the ASC Cope Award for Distinguished Achievement in Organic Chemistry (1974), the California Scientist of the Year award (1974), the Southern California ACS Tolman award (1985), the Chicago Section ACS Gibbs Medal (1985). Cram also received the American Chemical Society’s most prestigious award in organic chemistry, the Roger Adams Award (1985).
In 1988 he was named University Professor, in 1992 he received the National Academy of Sciences Award in Chemical Sciences and in 1993 President Clinton presented him with the National Medal of Science.

Besides his lifelong love of reading, Donald J. Cram was a surfer, who was a member of the San Onofre Surfing Club, a tennis player, and a skier. He also played the guitar and had a repertoire of folk songs he sometimes entertained his undergraduate students with.

Donald J Cram died of cancer at his home in Palm Desert on the 17 June 2001. He was eighty-two years old.

In his will, Donald J Cram endowed a chair, the D.J. and J.M. Cram Chair of Organic Chemistry to the Department of Chemistry and Biochemistry at UCLA.