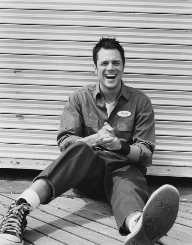 Phillip John Clapp, Jr., or Johnny Knoxville American actor, comedian, film producer, screenwriter and stunt performer was born in Knoxville, Tennessee on March 11, 1971. His father was a car salesman, and his mother a teacher at Sunday school. He became interested in acting after reading the novel On The Road, by Jack Kerouac. He graduated from South-Young high school in 1989 and moved to California to become an actor.

In a 2013 interview, Knoxville revealed, that he comes from significant inbreeding. He had hired a genealogist, who helped him trace his family tree. When he was eight years old, Knoxville had flu and pneumonia and nearly died.

In California, Johnny Knoxville starred in a few commercials and made several minor appearances. His big break did not come therefore he decided to create opportunities for himself. Knoxville started to write and pitch article ideas to various magazines. He had a plan to test self-defense equipment on himself, which caught the eye of skateboarding magazine Big Brother. The stunts were filmed and included in the video Big Brother’s Number Two.

After the first video, Johnny Knoxville and his fellow stars Jeff Tremaine, Sean Cliver, Joe Sperry and Dave Carnie produced a pilot for a new project. The group pitched the series to various networks. There was a bidding war between Comedy Central and MTV. In the end, a deal was made with MTV, and thus Jackass was born.

Knoxville starred on the Jackass for two years, but he turned down an offer to perform similar stunts on Saturday Night Live in 2005.

After the success of Jackass, Johnny Knoxville starred in several TV and Film projects. Most notable was The Dukes of Hazzard. He also starred in Jackass: The Movie, Jackass: Number Two and Jackass 3D. He also hosted an episode of Saturday Night Live. For his role along with Dwayne Johnson in 2014 movie Walking Tall, Knoxville earned $5,000,000.

Johnny Knoxville also has a production company Dickhouse Productions, which he owns and operates together with two of his Jackass franchise mates. In 2014, Knoxville formally announced a new production company Hello Junior, which has a standing contract with Paramount Pictures. The company created the successful movie Bad Grandpa in 2003. He has said to have many more projects in mind.

In 1995, Johnny Knoxville married Melanie Lynn Cates and had a daughter Madison. After 11 years of marriage, the couple separated. In 2009, he announced that he and his girlfriend Naomi Nelson were expecting a baby. The couple married in 2010. A year later, they had another child.

During the filming of the Jackass franchise, Knoxville was knocked out unconscious several times. During a stunt for Nitro Circus, he tore his urethra and had to flush it twice daily, by using urinary catheterization.

In 2009, he was held at the Los Angeles International Airport for having a grenade in his carry on. Johnny Knoxville was later released because it turned out that the item was a prop from a commercial that his assistant had packed in the bag.