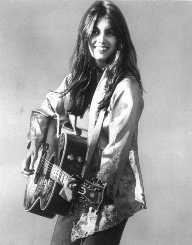 Born on April 2, 1947, Emmylou Harris is one of American’s most coveted singers and songwriter. Her incomparable talent coupled with hard work and diligence has made her one of the most decorated singers in the country. She has released several favorite songs and also acted as the bandleader, backing vocalist, songwriter, and duet partner. She is mostly acclaimed for her voice and craftsmanship.

Emmylou’s career has been characterized by awards, having won 13 Grammys and recognition by prominent music bodies. Harris throughout her career has worked with many famous artists like Dolly Parton, Roy Orbison, Albert Lee, Bob Dylan and John Denver among others.

Emmylou Harris was born to a Corp Officer Marine, Walter Harris, and Eugenia, a wartime military wife on April 2, 1947, in Birmingham, Alabama. Her childhood days were spent in North Carolina and Woodbridge, Virginia. Harris schooled in the Gar-Field Senior High School and won a scholarship to study music at the UNCG School of Music, Theatre and Dance at the University of North Carolina, Greensboro.

While in school, Emmylou practiced on songs of Joan Baez, Bob Dylan and Pete Seeger with the guitar. Her passion for music continued to grow as she studied and had to drop out to pursue the music career. To support her passion, Harris moved to New York, where she worked as a waitress. She also played at the Greenwich Village coffee shop in the1960s. This was the era that folk music was popular and booming.

After making some savings from her work as a waitress and performance at bars, Emmylou Harris released her debut album Gliding Bird in 1969. After the release, she joined Gerry Mule and Tom Guidera to perform as a trio. She was later in 1971 discovered by Chris Hilman of Flying Burrito Brothers who also recommended her to Parson then in need of a female vocalist to feature on his solo album.

In 1973, Harris joined Parson’s Fallen Angles. She collaborated with Parson on his Grievous which was released after his death by an overdose of alcohol and drug intake in 1974. Her season with Parson was also included in his Sleepless Night album in 1976.

In 1975, Harris released her debut label album, Pieces of the Sky, produced by Brian Ahern, under Reprise Records. The album, which featured Bluebird Wine and had some covers of the Beatles became a hit and success. It was the most expensive country record at the time. The track If I Could Only Win Your Love, a duet with Herb Pedersen became Harris’ first hit and charted number 4.

Formation Of The Hot Band

Emmylou Harris formed the Hot Band as suggested by the Executives of Warner Bros. Records to enable the label record her. The band consisted of six members. The group became victorious after a series of tours. However, some pioneer members were later replaced as they left to pursue solo careers. She released the album Elite Hotel in December 1975 with songs like One of These Days, Till I Gain Control Again" and  Sin City. It was very successful and was placed as the number one country album and won a Grammy for Best Country Vocal Performance, Female in 1976.

Gaining recognition for her artistic display of talent, Emmylou Harris featured on albums by artists like Bob Dylan, Neil Young, and Guy Clark. She released Luxury Liner in 1977 which became one of her best. In 1979, Harris released three studio albums, Blue Kentucky Girl, Beneath Still Waters and Light of the Stable a Christmas album. She then did a duet with Roy Orbison on "That Lovin' You Feelin Again." It became a huge success and charted top 10 in the Country and Adult Contemporary charts. The release also won them a Grammy for Best Country Vocal Performance by a Duo or Group.

In 1982, Emmylou Harris moved to Nashville where she recorded White Shoes in 1983. She also released albums like The Ballad of Sally Rose, 1985, Thirteen. She then collaborated with Dolly Parton and Linda Ronstadt after a previously failed attempt to release the Trio disc. The album became a commercial success and spent weeks as number 1 on the Billboard's Country Albums chart. It also won the Best Country Vocal Performance by a Duo or Group with Vocal. Other albums released by Harris includes Angel Band, 1987 and Bluebird, 1989.

Formation Of The Nash Ramblers

Emmylou Harris dissolved The Hot Band and formed The Nash Ramblers in 1991. In 1992, the band came out with a live album recorded at the Ryman Auditorium in Nashville, Tennessee in 1992. The album was a huge success commercially and won a Grammy. Her zeal and vision for success kept pushing her to greater heights.

In 1995, Harris released Wrecking Ball, one of her best albums.  She has since the recorded several albums and collaborated with top artists and won several awards. Her most recent project is her collaboration with Rodney Crowell to The Travelling Kind on May 12, 2015. The album won them an award for Duo/Group of the year by American Music Award.

Emmylou Harris in 1969 married Tom Slocum a songwriter and had a daughter Hallie. This didn’t work out well for the couples as they divorced along the line. She then got married to Brain Ahern in 1977 and had another daughter Meghann in 1979. Her third marriage was to English songwriter and musician Paul Kennerley, in1985 and divorced in 1993.

Emmylou Harris’ talent and the quality of music she does have won her several awards including 13 Grammy. She has always won three CMA Awards, five International Bluegrass Music Association Awards and four Americana Music Honors & Awards. Harris is a member of the Grand Ole Opry and has been inducted into the Country Music Hall of Fame 2008, American Academy of Arts and Sciences, 2009 and has an honorary doctorate of music from Berklee College of Music, 2009. She was honored with a tribute concert The Life & Songs of Emmylou Harris in 2016.