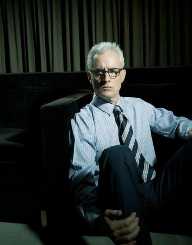 John Slattery is an American actor and director. Born on August 13, 1962, he is known for the role in the AMC drama series Mad Men as Roger Sterling. The role earned him four nominations at the Primetime Emmy Awards and two Critics’ Choice Television Awards. Making a film debut in A Woman of Independent Means Dwight, 1995, she has played roles in several other films, stage, and television work.

John Slattery was born on August 13, 1962, in Boston, Massachusetts. He is one of the six children by Joan (née Mulhern) and John "Jack" Slattery. His father was a leather merchant and his mother a retired CPA. His family is of Irish ancestry. Slattery received education at St. Sebastian’s School in Needham, Massachusetts. After graduating, he enrolled at The Catholic University of America receiving a Bachelor in Fine Arts in 1984.

John Slattery recounts being passionate about TV and movies while growing up. He had to watch them throughout the night, which made it difficult for him to wake up in the morning. Despite his great love for the movies, he was an athlete and desired to become a baseball player.

John Slattery made a film debut in 1995 playing a small role in A Woman of Independent Means Dwight. The following year, he appeared in City Hall as Detective George and followed it with Hallmark Hall of Fame, 1996 as Will Kidder.

His most famous role is as Roger Sterling in the series Mad Men. The role earned him several award nominations and won Screen Actors Guild Award for Outstanding Performance by an Ensemble in a Drama Series.

Aside from acting John Slattery has also ventured into directing with his first work being in 5 episodes of Mad Men, 2010 to 2013, followed by the feature film God’s Pocket in 2014. He directed three episodes of Love from 2016 to 2017.

John Slattery has played several other roles in films and television including Al Kahn on Homefront and as in the HBO miniseries From the Earth to the Moon as Senator Walter Mondale. John Slattery played Tommy Flannigan in the series K Street and made a guest appearance on Will & Grace and Sam. His other works include Sex and the City, Jack and Bobby, Desperate Housewives, The Colbert Report, Mona Lisa Smile, and Sleepers. Others include Dirty Dancing: Havana Nights, The Adjustment Bureau, Falling Man, Spotlight and Wet Hot American Summer: First Day Camp.

John Slattery and actress Talia Balsam married in 1998. The couple has a son. John Slattery was raised in the Roman Catholic faith. He is an athlete and loves to surf and ski.