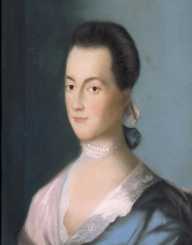 Abigail Adams (maiden name Smith) was born on November 22, 1744, in Weymouth, Massachusetts. Her mother was descendent of the Quincy family- a well known political family. Her parents had four children, three daughters, and a son. Her father was a liberal Congregationalist minister and a leader in the Yankee society. As a preacher, he emphasized reason and morality. Adams’ mother died in 1775 of smallpox, and her father- in 1784.

Adams was not formally educated. As a child, she was often sick, which has been seen as the potential reason for her not being schooled, besides the fact that females rarely were given the opportunity. Her mother taught her, and her sisters at home and Abigail learned to read, write and cipher. The family had a vast library, which enabled the girls to study English and French literature. She developed her ideas about women’s rights early in her life.

In 1762, John Adams accompanied his friend Richard Cranch to the Smith home. Cranch was engaged to Abigail’s oldest sister, and the two became parents of the federal judge William Cranch. John was attracted to the 17-year-old brunette, both for her beauty and knowledge in poetry, philosophy, and politics.

Her father approved of the match, but Abigail Adams' mother didn’t want her daughter to marry a country lawyer. Nevertheless, the couple married in 1764. They later moved to Boston where John expanded his law practice. The couple had six children in the next 12 years. Their marriage is well documented through their correspondence and other writings. John’s expanding law practice required the family to move to different houses, and due to the unstable situation in Boston, the family settled in Braintree in 1774.

In 1784, Abigail Adams and her daughter joined Adams at his diplomatic post in Paris. She held the role of the first U.S. minister to the Court of St. James’s. In 1797, John Adams was inaugurated as the second President of United States. At the time, she was attending to her dying mother and could not be present at the ceremony. As the first lady, she was continuing the formal pattern of entertaining. Each week, Adams held a large dinner and often made appearances in public.

Besides her role as the entertainer, Abigail also took an active part in politics and policies. At times she was so busy that her political opponents started to call her Mrs. President. She was well informed on the issues with her husband’s administration. People also often used her to contact the president. Abigail frequently corresponded with her sister, at times about matter not known to the public. She also took part in improving her husband’s political career, by planting stories in the press and supporting his career in every aspect.

The family relocated to Washington D.C. in 1800, making Abigail Adams the first First Lady to live in the White House. At the time, White House was called the President’s House, but it was not even close to being finished. Nevertheless, Abigail enjoyed the location but complained that despite the closeness of the woods, she could not find any firewood for the First Family.

John Adams was defeated in his re-election campaign, and the family moved from D.C. to Quincy in 1800, only after living several months in the White House. Her son went into the political career, and Abigail Adams was closely following his progress. She also reached out and corresponded with Thomas Jefferson. She raised her granddaughter and elder grandchildren while her son was minister to Russia. One of her daughters died of breast cancer after three years of suffering from pain.

Adams died on October 28, 1818. She suffered from typhoid fever. Adams was buried next to her husband in a crypt in the United First Parish Church (Church of the Presidents).