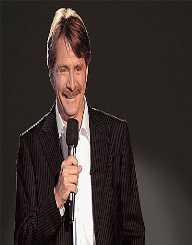 Jeff Foxworthy is a 58 year old American comedian from Atlanta, Georgia. He is most widely known for his redneck humor, particularly his “You might be a redneck if...” jokes. He has been active in stand-up comedy, radio, and TV, and is the best-selling author of over ten books.

He was initially inspired by Bill Cosby’s clean comedy about everyday life. Now, many of his skits revolve around being a redneck, which he describes as “a glorious absence of sophistication.” Foxworthy is recognizable by his trademark mustache which he has had since his senior year of high school. When asked during an interview if he would ever consider shaving it, he said: “I don’t even know if there’s a lip under there anymore.”

Jeffrey Marshall Foxworthy was born on September 6, 1958, in Atlanta, Georgia. He was the firstborn child of Jimmy Abstance Foxworthy and Carole Linda Foxworthy. Jeff grew up with two younger siblings, Jennifer and Jay. His father worked a senior-level corporate job in IBM. He left their family when Jeff was 9, and his mother struggled to raise him and his siblings.

Jeff graduated from Hapeville Highschool, where he was known for being “the class clown.” He went on to attend the Georgia Institute of Technology, in Atlanta. However, he left before obtaining his degree.

Foxworthy worked on mainframe computer maintenance at IBM for five years. In 1984, his colleagues persuaded him to enter the Great Southeastern Laugh-off contest, which he won. Shortly thereafter he quit his job and became a full-time comedian. He began making comedy albums and then starred in his first TV show, The Jeff Foxworthy Show. Originally, his humor revolved around the family and everyday life. Soon, however, he discovered his famous line “You might be a redneck if... .” He has since become one of the most successful stand-up comedians, with an estimated net worth of 100 million dollars.

Foxworthy was part of the Blue Collar Comedy Tour along with Bill Engvall, Ron White, and Larry the Cable Guy. They toured together doing stand-up comedy from 2000 to 2006. The tour was very successful, and it served to revamp Foxworthy’s career. It also led to another TV show.

Foxworthy has released six comedy albums. His first one, You Might Be a Redneck If… (1993), sold more than three million copies. Both his first and second albums were certified Platinum multiple times. Other titles include Games Rednecks Play (1995), and Totally Committed (1998), which reached platinum and gold status respectively.

Jeff is the author of several books. Many of them are based on his redneck jokes, including his first, You Might Be a Redneck If... (1989). He also authored an autobiography titled No Shirt, No Shoes...No Problem! (1996), and co-authored a cookbook called  The Redneck Grill. More recently, he has written several children’s books. His first one, Dirt on My Shirt (2008), landed on the New York Times bestseller list for six months. It was followed by Silly Street (2009), and Hide!!! (2010). Some of his most notable titles include:

Following the success of his albums, Jeff starred in The Jeff Foxworthy Show. This show based on his stand-up comedy routine aired for two seasons (1995-1997) in ABC and then NBC. Similarly, Blue Collar TV sprung from the Blue Collar Comedy Tour. It ran for two seasons (2004-2006) on the WB Network, with Bill Engvall and Larry the Cable Guy as co-stars.

Foxworthy was also the host of the TV game show Are You Smarter Than a 5th Grader? It aired for four seasons on Fox (2007-2009 and 2015), and for two on syndication (2009-2011). In this quiz game, a single participant had to answer questions from elementary school textbooks, earning money for correct answers. Fifth-grade cast members were available to help the participants answer the questions.

Later on, Jeff also hosted The American Bible Challenge. This game ran for three seasons (2012-2014) on the Game Show Network. Contestants had to answer questions about the Bible and then donated their prize money to the charity of their choice.

For ten years (1999-2009), Foxworthy hosted The Foxworthy Countdown. It was a countdown of the top 30 country music hits, interspersed with interviews, calls, and comedy.

Jeff Foxworthy is the voice behind several animated characters, including:

Foxworthy won the American Comedy Award for Funniest Male Stand-up Comic in 1990. He also won the People’s Choice Award for Favorite Actor in a New TV Series in 1996 for his work in The Foxworthy Show. In 2001, he was nominated for “Broadcast Personality of the Year” by the Country Music Association. Additionally, he has multiple nominations for Grammy Awards (1996, 1999, 2001, 2007), and Daytime Emmy Awards (2010, 2014).

Foxworthy is a Christian and grew up Southern Baptist. Rather than going to church for one hour on Sundays only, he prefers to focus on living out his Christianity every day. He has run a weekly Bible study group for homeless people for several years.

Family is a priority for Foxworthy. In an interview in 2006, he said, “I turned down a movie this summer because it was nine weeks in Vancouver and my oldest daughter is 14. I’ve got four more summers with her. I’m not giving away nine weeks of her summer to go do a silly movie.”

Jeff considers himself a simple, regular guy. He is an avid outdoorsman who enjoys fishing, hunting and spending time on his farm in Georgia. In 2011, he launched Foxworthy Outdoors, a website featuring outdoors products. It also includes videos documenting hunting and fishing trips with his friends.

Foxworthy works with Atlanta Mission, which provides shelter and recovery programs for homeless people. He and his family also support Compassion. They first heard about this organization during a church trip to one of Kenya’s poorest slums. Compassion is dedicated to helping children living in poverty. The Foxworthys sponsor children and young adults, and also helped build an orphanage in Kenya.

Additionally, he also devotes time and resources to helping children with cancer. He is known for working with organizations like CURE Childhood Cancer, and Camp Sunshine. Jeff and his wife have also worked with Duke’s Children Hospital & Health Center in Durham, helping them raise funds for cancer treatment.