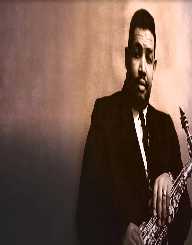 Jazz Saxophonist Cannonball Adderley was born in Tampa, Florida on the 15 September 1928. His father was a music educator and musician who played the cornet. Adderley had one brother Nat who also became a jazz musician. Cannonball Adderley started playing saxophone at age fourteen.

Adderley was drafted in 1950, and during his time in the US Army, he was the leader of the 36th Army Dance Band (1952-1953). Brother Nat also played in the band as did others who went on to make a name for themselves in jazz. Viz. Curtis Fuller (trombone) and Junior Mance (piano).

During his university years Adderley was known for his voracious appetite and earned the nickname Cannibal, this morphed into Cannonball and the nickname stuff for the rest of his life.

Following his studies in music, Cannonball Adderley was appointed as the high school band director at Dillard High School in Fort Lauderdale, Florida (1948-1950). In 1955, he moved to New York City with his brother Nat. Adderley was going to do graduate studies in New York, but these plans changed when he was discovered at the Cafe Bohemia when doing a session with Oscar Pettiford’s band. Immediate comparisons were made to the legendary Charlie Parker, Adderley's hero. In 1955, Adderley signed with the Savoy record label.

Nat and Cannonball Adderley then formed a quintet with and soon they were noticed by Miles Davis. Adderley consequently was asked to join in the Miles Davis sextet. Davis was impressed with Adderley’s alto saxophone playing. Fellow musicians in the sextet included Bill Evans and John Coltrane. During his time with the Miles Davis sextet, Adderley played on the Davis recordings of Milestones and King of Blue.

Adderley left the Miles Davis sextet in 1959 and joined up with his brother Nat to revitalize the Cannonball Adderley Quintet. They did a live recording at San Francisco’s Jazz Workshop, and it was met with wide acclaim. This album is considered to be instrumental in the birth of what became known as soul jazz. The album was The Cannonball Adderley Quintet in San Francisco. Recorded at The Jazz Workshop, the album was one of the first live recordings made in a club environment. The album sold 50,000 copies which at the time, was considered a bestseller for a jazz album.

During his twenty years in the spotlight as a jazz musician of note, Adderley impressed people with his dedication to jazz music. Cannonball Adderley was involved in the education and preservation of the jazz music as an American art form. He also encouraged and helped emerging musicians. The last recording made by Cannonball Adderley was a recording of orchestral music he wrote based on the life of John Henry. Two of his most memorable albums are Milestones (1958) and King of Blue (1959). His 1962 recording with Nancy Wilson has also reached legendary status in the eyes of jazz fans.

Always the educator, he led jazz workshops and was a member of the Jazz Advisory Board of the National Endowment for the Arts.

Cannonball Adderley was married to the actress Olga James from 1962 until his death in 1975.

His legacy is that of a brilliant musician who worked hard to promote the music he loved in the post-WWII era in North American.

Cannonball Adderley was generous in his enthusiasm and support of upcoming jazz musicians. He was responsible for Chuck Mangione being noticed by Riverside Records, and he encouraged Nancy Wilson at the start of her career. His collaborations with Miles Davis and John Coltrane have gone down into the annals of jazz music history.

In 1961, Cannonball Adderley worked on The Child’s Introduction to Jazz with Riverside Records.