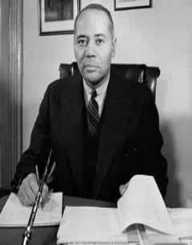 Charles Hamilton Houston was an African American lawyer and civil rights activist who fought for the dismantling of the racial segregation laws in the American south.

Charles Hamilton Houston was born on the 3rd September 1895, in Washington D.C. He was born to a practicing lawyer father William Le Pre Houston, and Mary Houston. Houston went to Dunbar High School. In 1911 he joined Amherst College. He graduated in 1915 top of the graduating class. Ironically he was the only Afro-American in that class. Returning to Washington DC, Houston started teaching English at the black only college, Howard University.

In 1917 Houston joined the US Army. The US had joined WW1. He was appointed a First Lieutenant of the Infantry Battalion and stationed in Maryland. He fought in WW1 during his deployment in France and Germany. Despite being a senior ranking military officer, Houston still experienced racial prejudice for being black. He was discharged from the military in 1919.

He enrolled to study Law at Harvard University. Houston was elected to the editorial panel of the Harvard Law Review. He was the first ever black student to achieve such a fate. He graduated from the college in 1922. In 1923 he went to Madrid on a student scholarship. He studied Civil Law at the University of Madrid. In 1924 he returned to the US and passed his bar entry exam. He got his license to practice law at the District of Columbia bar. He joined his father at his legal office. They renamed the firm Houston and Houston.

Houston started lecturing at the Howard University School of Law. He taught his students that the law was not just a set of regulations set for the legal practice. He told them that they should endeavor to master the law as a tool to fight injustice and promote equality.

In 1929 he was appointed the Vice Dean of the Faculty of Law. He instituted reforms in the faculty that brought the much-needed esteem to the university. In 1931, the school got the accreditation as a competent institution of higher learning. Houston stayed at the law school until 1935. He managed to train some of America’s bright legal minds including Supreme court Judge Thurgood Marshall.

In 1935 Houston joined the service of the National Association for the Advancement of Colored People or NAACP. This was an organization that championed the rights of Africans in American society. He was later joined by Thurgood Marshall at the organization. Houston won some landmark cases for the black community while at the organization. In 1938 Houston won a case against the separate but equal campaign. Black students were denied entry in a local university on the basis of their color. Instead, they were given funds to seek education in black colleges in other states. The court ruled the practice unconstitutional. Black students were allowed to enter into previously white-only universities.

In 1940 Houston resigned from the organization due to failing health. Marshall continued with the legal and constitutional battles for the advancement of the rights of the black community. Thurgood won monumental court battles. In 1954 Thurgood got a ruling in his favor. The court ruled that racially segregated schools were unconstitutional. Thurgood later hailed Houston for the momentum he raised in the struggle for equality.

In his private practice in Washington DC, Houston continued fighting racial prejudice against the Black community. He won landmark cases in court. In 1944, four years after leaving NAACP, Houston won the case against labor union discrimination of black workers. The court ruled that black workers had the constitutional right to be equally represented. In 1948 he won another landmark ruling. The court ruled that blacks had the right to own property, and racial color should not be a factor while trading property.

In 1924 at the age of 29, Houston got married to Gladys Moran. The union lasted until they divorced in 1937. He then married Henrietta Williams. He fathered one son with her. In 1940 the couple welcomed their only child Charles Hamilton Houston Jr.

Houston was also fondly known as the Killer of Jim Crow laws.

Charles Houston died on April 22, 1950, in his hometown, Washington DC. He was aged 54 years. He was honored by the NAACP with the Spingarn Medal for his fight for the black community.