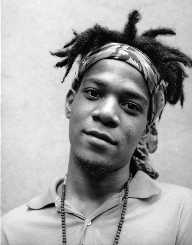 Jean-Michel Basquiat was an American Artist and Painter born on December 22nd, 1960. Among his best graffiti work was "SAMO" which he did in New York City. Before he started his painting career, Jean-Michel Basquiat earned a living by selling sweatshirts and postcards. He rose in his career to become among the best artists of his time. During his career, he was involved with Andy Warhol among other great artists.

Jean-Michel Basquiat was born on December 22nd, 1960. His place of birth was Brooklyn in New York of the United States. His father was Gerard Basquiat and originated from Haiti. He earned a living as an accountant. His mother was Matilda Andrades. Jean had two younger sisters.

Jean-Michel Basquiat was a bright child. When he was four years old, he could read and write. His talent in arts also developed since he was a young boy. He enrolled in the Edward R. Murrow High School in Brooklyn but did not complete his studies. He dropped out of school in the 10th grade.  His father was not pleased with this move and forced him to leave their house. He then left home and studied art in the City-As-School. This was a school that gave an opportunity to students who did not finish their school education. During this time he had to stay with friends. Meanwhile, he earned a living as a t-shirt and post-cards entrepreneur.

Jean-Michel Basquiat began his career in 1976 as a graffiti artist along with his friend Al Diaz. This went on for three years. In 1978, he took an artist job at the Unique Clothing Warehouse located in Manhattan, New York. His graffiti work at the company was quite impressive. The ‘The Village Voice’ publication then published some of his graffiti work.

His career kept progressing over the years, and his work also gained popularity. In 1979, he appeared in the TV show know as ‘TV Party.’ This was his first appearance on the TV. He continued working on the show for a few years. During this time, Jean also co-founded Test Pattern rock band. His other associates were Wayne Clifford, Michael Holman, Nick Taylor, Vincent Gallow and Shannon Dawson. Jean took a role in acting later. He was cast in the film Downtown 81.  He later worked with another prominent painter know as Andy Warhol.

The 1980s marked the turning point of Jean’s career. In 1980, he went to The Times Square Show to exhibit his work of art. Meanwhile, he hosted a successful show known as The one-man show. This caught the attention of Artform magazine which led to the publication of his work The Radian Child by the magazine. During this time, he was recognized to be among the best artists at the time. His paintings were also among the best selling.

From 1983, Jean-Michel Basquiat worked with Larry Gagosian, an art dealer. Meanwhile, he collaborated with Rammellzee and K-Rob to produce a rap single. Later in 1983, he worked with Andy Warhol and together they produced paintings for a while. Among the paintings they did was the Olympic Rings. He later traveled to Africa in 1986. He was attending a show in Abidjan in Ivory Coast. During this time, he was greatly inspired by the art in Africa.

Jean-Michel Basquiat never married throughout his life and never had children. However, he was once involved with singer Madonna.

Jean-Michel Basquiat breathed his last on August 12th, 1988 after a heroin overdose. He died in Manhattan, New York. He was 27 years old at the time of his death.