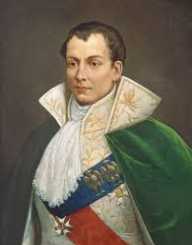 Joseph Bonaparte was a French diplomat who served as King of Naples and Sicily and King of Spain.

Joseph Bonaparte was born on January 7, 1768, in the town of Corte, Corsican Republican. His father was Carlo Bonaparte, a lawyer, and a diplomat. His mother was Letizia Ramolino. Both of his parents came from noble Italian families.

He was the eldest brother of Napoleon, the Emperor of France. He had three other younger brothers, named Lucien, Louis, and Jerome. He had three younger sisters, named Maria Anna, Pauline, and Caroline.

Joseph Bonaparte initially became a politician and diplomat. He was a member of the French House of Representatives and served as the French ambassador to Rome. He helped Napoleon rise to power by overthrowing certain parts of the government.

The people generally liked Joseph during his reign. He went on a tour to all the towns and villages in Naples. He made great reforms to help the poor, but also let the rich keep a large part of their wealth. He built roads, schools, and an improved street-lightning system. He improved the living conditions of monks and introduced better sentences for prisoners.

Many of his opponents spoke out against him publicly and tried to destroy his reputation. He didn’t have much power in Spain and had to get Napoleon’s approval for all of his decisions. In 1813, he abdicated the throne and returned to France. He was in charge of the affairs in Paris and held the title of Lieutenant General of the Empire.

In 1817, Joseph Bonaparte decided to move to the United States. He initially spent a brief time in Pennsylvania and New York. After that, he built a large estate in Bordentown, New Jersey. He often hosted large gatherings with international diplomats. In 1740, he returned to Florence.

Joseph Bonaparte died in his home in Florence, Italy, on July 28, 1844. His remains were buried at the Les Invalides complex in Paris.

A gulf in Australia and a lake in New York are named after Joseph. He is mentioned in the 1939 play Golden Boy, the 1951 novel Desiree, and the 1955 novel The Tontine.