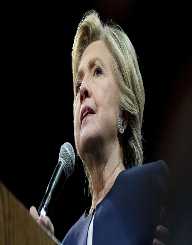 American politician and former First Lady of the United States Hillary Clinton was born on the 26 October 1947 in Chicago, Illinois. Clinton has two brothers (Hugh b.1950) and Anthony (b.1954). Her parents were Hugh Rodham and Dorothy Howell Rodham.

Hillary Clinton graduated from Wellesley College in 1969. During her high school days she was involved in student politics and in her senior year was elected class president.

She earned a law degree at Yale University (1973). After obtaining her law degree, Clinton did a post-graduate course at the Yale Child Study Center.

Hillary Clinton was politically aware from a young age. In 1964 she campaigned for Barry Goldwater, the Republican presidential nominee. She was also influenced by Martin Luther King, becoming socially active after being exposed to his thinking. In 1968 Clinton joined the Democrat Party. As a student, she worked on Walter Mondale’s subcommittee on migrant workers in Washington D.C. (1971). In 1972 she spent her summer college break working on the campaign of Democratic presidential nominee George McGovern.

Hillary Clinton was also a staff member of the presidential impeachment inquiry staff advising on the Watergate Scandal (1974). Jerry Zeifman later claimed that he had fired Clinton from the committee because of unethical behavior.

After her time on the committee, Clinton moved to Arkansas where she took up a position on the staff of the University of Arkansas Law School. Bill Clinton, whom she had met at Yale University, was teaching there as well.

After her marriage to Bill Clinton in 1975, the couple continued living in Arkansas.

In 1976, she got involved in Jimmy Carter’s presidential campaign.

Bill Clinton had become attorney general of Arkansas, and in 1978, he was elected governor of the state. Apart from one loss in 1980, he held the position of Governor of Arkansas until 1990. Hillary Clinton meanwhile, continued with her law career. She worked at a law firm in Arkansas before being appointed the part-time chairman of the Legal Services Corporation in 1977. As the wife of the state governor of Arkansas, Hillary Clinton sat on some committees including the Arkansas Educational Standards Committee and the Arkansas Advocates for Children and Families. She was on the board of the Arkansas Children’s Hospital, Arkansas, Arkansas Legal Services and the Children’s Defense Fund.

When Bill Clinton was elected President of the United States, Hillary Clinton was First Lady from 1993 until 2001.

President Clinton appointed his wife as the head of the Task Force on National Health Reform in 1993. The couple was involved in the Whitewater Real Estate Project which defaulted after the back of the project, Morgan Guaranty Savings and Loans collapsed. The failure of the project cost the Federal government 73 million dollars. Later, this project was investigated with congressional hearings as well as an independent investigation. The most controversial case for the Clintons was the Monica Lewinsky scandal in 1998 which involved her husband. Although he was impeached, he was not convicted and saw out his the final term of his presidency.

After her husband left office, Hillary Clinton went into politics and was a U.S. Senator from 2001 until 2009. During this time she served as the Secretary of State.

In 2007, Hillary Clinton confirmed that she would run for the U.S. presidency. Then in 2008, Clinton stood down when it became apparent that fellow presidential candidate. Barack Obama held the majority of the vote. When Obama became president, he made Hillary Clinton Secretary of State (2009-2013).

Hillary and Bill Clinton were married in 1975. The couple has one child, a daughter Chelsea.