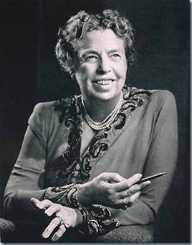 Eleanor Roosevelt is a native of New York and was born the 11th day 1884, in New York City. Her dad was Elliott Bulloch Roosevelt while her mother was Anna Rebecca Hall. They were both well-known socialites. She had a famous uncle, Theodore Roosevelt, who as the 26th American President.

Eleanor also had two brothers who were named Elliott Bulloch Junior and Gracie Hall Roosevelt. She also had a half-brother from her father’s relationship with an employee of the family, Katy Mann.

She was raised alongside her brother by their maternal grandmother in Tivoli, in the seamy side of New York. This was after her alcoholic dad had passed on and this was not a pleasant experience for her.

Eleanor was home-schooled, and by 15 years of age, she was away to Allenswood Academy, which was located in the famous town of Wimbledon in England. She was a ward of the school’s headmistress for the period to 1902. She imbibed urbane and assertive lessons from the school during the four-year period from 1899.

Eleanor Roosevelt was given a sprite social training at the finishing school, and this prepared her for the political years ahead.

In the Public Eye

Eleanor Roosevelt made her way back in 1902 to America, and this was at the prodding of her surviving grandmother. The occasion was a debutante ball that was slated for December in the same year. At this time though, she was already attracted to social life and the call of politics.

Eleanor Roosevelt volunteered as a teacher in New York in a College Settlement run by the Settlements Movement. And she also joined up at the National Consumers League in no time. She was noted within the New York reform circles around this time.

Eleanor Roosevelt married Franklin Delano Roosevelt after they met in the summer of 1902. FDR was her dad’s relation-a fifth cousin, and the union was consummated in March 1905 and on the 17th day, to be exact.

She lived under the shadows of her mother-in-law for the next ten years, and she made her home at Hyde Park. FDR won elections to the Senate of New York in 1911, and this was the opening for her to move to Albany. Here, she made her first independent home and away from the dominance of a controlling mother-in-law.

When FDR won the White House race in 1933, Eleanor Roosevelt became the First Lady on the 4th day of March. She was not ready for a routine life as First Lady, and this was depressing for her. She got her spouse’s support to redesignate the functions of that office. She was actively interacting with workers during the Great Depression.

She took on a circuit role: delivering speeches, writing and presenting lectures. She was reputed to have made $75,000 in the first year as First Lady. She played an active role in defusing tension when wives of war veterans from the WW1 marched on Washington.

At the outset of WW2 in 1939, Eleanor Roosevelt supported the move of children of refugee families from Europe to America. She fostered the acceptance of more Jews into America as a result of the holocaust, with mixed results.

She became a co-chair of the Office of Civilian Defense within the decade of war. She also produced a script for 'Women in Defense,' a short film that hit the launch table about the same time.

Eleanor helped to rally American and the allied troops in England in October 1942 by traveling abroad. She made a similar trip in August 1943, as a morale booster to American soldiers in the South Pacific war theatre.

When FDR passed away, Eleanor Roosevelt had her fame cut out for her. She was actively involved in women empowerment activities. She boosted the New Deal coalition and worked on as a public speaker, political activist, and writer. She is said to have anchored the second-wave feminism during her husband’s administration.

She made it to ‘Gallup's List of Most Widely Admired People of the 20th Century’ and was no doubt, a resolute and influential figure. She was actively involved in co-founding “Freedom House,” an NGO. She also rallied for the coming to being of the United Nations.

President Harry S. Truman invited her to serve as a delegate to the UN General Assembly for the USA over the seven years period to 1952. Eleanor attained a status in her life that was beyond just serving as FDR’s First Lady.

She also took up a prominent position to support the Civil Rights movement across America.

Eleanor Roosevelt is still reputed to be America’s feminist icon and First Lady with the longest tenure. She advocated for expanded roles for the womenfolk at the workplace and African Americans.

She got a posthumous award from the United Nations in the year, 1968 for her human rights advocacy. She got an induction in the year 1973 into America’s Women’s Hall of Fame. Her Val-Kill stone cottage was inaugurated as a National Historic Site in 1977, in her honor.

In 1998, Bill Clinton set up an award in her name for Human Rights, and a monument was also named after her in New York, at the Riverside Park.