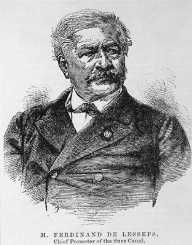 Born on November 19, 1805, Ferdinand de Lesseps was a French diplomat and the developer of the Suez Canal. The opening of the canal in 1869 linked the linked the Mediterranean Sea to the Red Sea, reducing the sailing distance between Europe and East Asia. In the 1880’s, Ferdinand de Lesseps tried to repeat his success by building the Panama Canal at sea level, but the project was impeded by the outbreak of malaria and yellow fever coupled with some financial problems. This shuttered his dream of creating the Ferdinand de Lesseps Panama Canal for good. The project was however acquired by the United States, solve the epidemic problem, changed the initial design to a non-sea level canal with locks, and completed it in 1914.

He returned to France in 1837, in 1839 was appointed consul of Rotterdam, and was transferred to Malaga the following year. After serving two years in Malaga, Ferdin and de Lesseps was sent to Barcelona and within the same year promoted to the status of consul general. Ferdinand de Lesseps later served as the minister of France at Madrid from 1848 to 1849 and retired afterward. On August 30, 1851, Ferdinand de Lesseps was created the 334th Commander and the 200th Grand Cross of the Order of the Tower and Sword.

After Said Pasha succeeded his father as the viceroy of Egypt, Ferdinand de Lesseps invited de Lesseps for a visit on November 7, 1854. On of the 30th of the month, the two signed an agreement with him to build the Suez Canal. Two French engineers Louis Maurice Adolphe and Linant de Bellefonds who were in the Egyptian service, Linant Bey, and Mougel Bey, drew the first design for the project. The design provided a direct link between the Mediterranean and the Red Sea. After some adjustment to the original design, the civil engineers constituting the International Commission for the piercing of the Isthmus of Suez in adopted it in 1856. There were several oppositions and criticisms, but de Lesseps was unperturbed and raised the needed capital for the project. On November 17, 1869, the Khedive, Ismail Pashaofficially opened canal.

In 1879, the Congress made up of 136 delegates including Ferdinand de Lesseps agreed on constructing the Panama Canal without locks like that of Suez Canal. Ferdinand de Lesseps was therefore appointed as the President of the Panama Canal Company at age 74. The project was however affected by an epidemic of malaria and yellow fever. He traveled to New York City in February 1880 to raise money for the project, and later met with President Rutherford Hayes and other stakeholders. The project was estimated to take eight years and 658 million francs to complete. The works on the canal commenced in 1882 but were stalled by technical difficulties and their inability to operate in the wet tropics. The situation worsened with recurrent landslides into the excavated parts and malaria and yellow fever epidemic. These and other challenges including corruption rendered The Panama Canal Company bankrupt in December 1888 and in February 1889 went into liquidation.

This failure was later termed as the Panama Canal Scandal after it was discovered that some French politicians and journalist received bribes. In February 1893 de Lesseps, his son Charles Théodore de Lesseps and others were tried, found guilty, and de Lesseps was fined and given a prison term. The Court of Cassation later reversed his prison term. In 1904, the United States acquired the project and continued with the project.

In 1873, Ferdinand de Lesseps became a member of the French Academy of Sciences and accepted the presidency of the French committee of Leopold II of Belguim’s International African Society. In 1897, he was elected an Honorary Foreign Member of the American Academy of Arts of Sciences and his statue built by Emmanuel Fremiet on November 17, 1899, stands at the entrance of the Suez Canal.