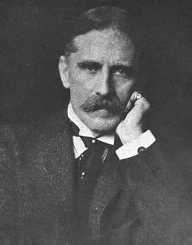 Henry Jackson van Dyke, Jr. was born on November 10th, 1852 in Germantown, Pennsylvania. His father Henry Jackson van Dyke, Sr. was a prominent clergyman in Brooklyn and was known for his anti-abolitionist views. Van Dyke attended the Poly Prep Country Day School and graduated in 1969. Afterwards, he went to study at the Princeton University and graduated with a Master of Arts in 1876. He then spent two years in Germany, where he studied at the University of Berlin.

Upon his return to the United States, Van Dyke attended the Princeton Theological Seminary, and after finishing his studies, he began to serve as a pastor. He became a pastor at the Brick Presbyterian Church in New York and quickly gained a national reputation for his preaching. His sermon on “The Voice of God” was about hearing God in nature.

While working as a minister, Henry Van Dyke began to write. He and his friend W. S. Macy collaborated on an illustrated article for the Harper’s Monthly Magazine. His first book The Reality of Religion was published in 1884. The book focused on his studies at the seminary and his work as a minister. His second book was released three years later, called The Story of the Psalms. His following books focused on religious matters. His works from the time include The True Presbyterian Doctrine of the Church, The Bible As It Is, The Christ Child in Art and many others.

Henry Van Dyke's first liturgy book named The Book of Common Worship came out in 1906. In 1899, Dyke began serving as a professor of English Literature at Princeton. One of his students at the time was Richard Halliburton, who became Editor in Chief of the Princeton Pictorial. From 1908 until 1909, he served as a lecturer at the University of Paris

Henry Van Dyke and Woodrow Wilson were both friends and former classmates. When Wilson was elected the President, Van Dyke was appointed the Minister to the Netherlands and Luxembourg. Just shortly after his appointment, World War I broke out in Europe. Many Americans were escaping to the Netherlands, and although Van Dyke lacked experience as an ambassador, he conducted himself as a diplomat and organized work for the relief of Americans in Europe. His experiences from this time were described in the 1921 book,

In 1916, Henry Van Dyke resigned as an ambassador and returned to the United States. Upon his arrival, Dyke was awarded several honors, including being elected to the American Academy of Arts and Letters. Van Dyke died on April 10, 1933. His son Tertius wrote his biography Henry Van Dyke: A Biography, published in 1935. Van Dyke and his wife Ellen Reid had nine children.