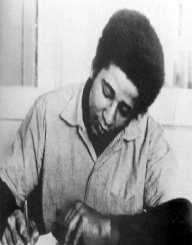 George Lester Jackson was born on September 23, 1941, in Chicago, United States. His parents Lester and Georgia Bea had four more children. Jackson had a troubled youth. He spent time at the California Youth Authority Corrections Facility for convictions of armed robbery, assault, and burglary. When he was twenty years old, Jackson stole $70 from a gas station, threatening with a gun. For this crime, he was sentenced to one year in prison.

During his time at the San Quentin State Prison, Jackson met several people and got involved in several revolutionary activities. He was involved in guard and inmate assaults. For these actions, Jackson’s prison sentence was extended. Jackson was often described as anti-social and egocentric personality.

In 1966, Jackson met W.L. Nolen and was introduced to Marxist and Maoist ideas. Nolen and Jackson founded the Black Guerilla Family, which was based on Marxist political thought. After this, Jackson's actions in prison became more undisciplined, and he had to spend more time in solitary confinement. During this time he studied radicalism theories and political economy. Jackson often wrote letters to his friends and people who shared his beliefs and later compiled these letters into the books Soledad Brother and Blood in My Eye. These books brought a lot of attention to Jackson and became bestsellers in the United States and Europe.

Jackson transformed greatly during his time in solitary confinement, and the prison warden described him as a sociopath. Jackson began to amass a following of other inmates, mostly blacks, but also whites and Hispanics. In prison, he also met Huey P. Newton and later joined the Black Panther Party.

In 1969, Jackson was transferred to Soledad prison, together with Nolen. The following year, Nolen was shot by a prison guard during a yard riot. Nolen’s death greatly affected Jackson, and he began to confront the corrections officers and talked about protecting inmates. Jackson also began to talk about revenging Nolen’s death.

Just a few weeks later, Jackson and his fellow inmates FleetaDrumgo and John Clutchette murdered a corrections officer by beating him and throwing him from the third floor of the prison. Miller had shot three inmates the previous year and was not convicted since the grand jury ruled his actions to be justifiable homicide. Jackson and the other two killed him as direct retaliation for the killings.

In 1971, Jackson filed a civil lawsuit against the California Department of Correction. He met with the attorney Stephen Bingham on August 21, 1971. When leaving the attorneys office, escorted by Urbano Rubico, Rubico noticed a metallic object in Jackson's hair, which turned out to be a wig. Rubico ordered him to remove it, and Jackson pulled out a Spanish Astra 9mm pistol from the wig. It is not known how Jackson acquired the gun, but Bingham was accused of smuggling the gun to him and spent 13 years as a fugitive.

Jackson was pointing the gun at Rubico and ordered him to open all cells. The inmates then overpowered the guards and took them hostage. Five guards were killed and placed in Jackson's cell, and three other guards were shot and stabbed but survived the assault. After the killings, Jackson headed to the exit with his friend Johnny Spain and escaped in the yard. There he was shot to death. The incident happened three days before the trial for the murder of John Mills had started.