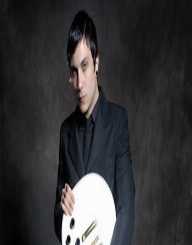 Frank Iero, Jr.will always be in the minds of rock music lovers not just for his music style but artistic displays. Born on October 31, 1981, Frank Iero is an American musician best known for his involvement in the rock band My Chemical Romance and post-hardcore band Leathermouth. He served as the rhythm guitarist and backup vocalist for the aforementioned bands. Apart from playing in bands, he also came out with a solo punk rock project, Frank Iero Iero, and the Patience.

His latest works include the album Stomachache released in 2014 and the single Weighted which was premiered on BBC Radio One in July 2014. He is also known as being a pro-gay person, and his stance on the gay right has been unequivocal.

Frank Iero, Jr.was born on October 31, 1981, in Belleville, New Jersey. He had a brief education because he suffered from bronchitis and other infection, which made him spend most of her time in the hospital. He had his education at a Catholic school and went to the Rutgers University on scholarship but dropped out later on choosing music ahead of his education. Having some form of musical background as his father and grandfather were musicians; Iero was encouraged by his mother to pursue music. She even gave her basement out for is musical practices. Though he started with drums as suggested by his dad, Iero fell for guitar rather.

Frank Iero didn’t have smooth education as a child and but never gave up on his love for music. At age 11 he joined the local band New Jersey punk. He played with the band for a while and with his talent and potential were glaring, and would later be rolled onto My Chemical Romance after serving as a frontman for the band Pencey Prep. His career at Pencey Prep was an effective and vibrant one and was part of the band's release of the album Heartbreak in Stereo by the independent Eyeball Records. Sadly the band disbanded shortly after that release and Frank had to find himself another band. Post-Pencey Prep disbandment, Iero played in bands like I Am A Graveyard, Hybrid, Sector 12 and American Nightmare. With his close relationship with some members of My Chemical Romancee specially Gerard Way, he helped them with their first show and would later be part of the band.

Career At My Chemical Romance

After joining other bands and playing for a while, Frank Iero finally joined My Chemical Romance in 2002. Some of his early features work with the band includes, Honey, This Mirror Isn’t Big Enough for the Two of Us and several others on the band’s debut album, I Brought You My Bullets, You Brought Me Your Love. Frank Iero was an integral part of the release of the second studio album Three Cheers for Sweet Revenge in 2004 and other albums like The Black Parade in 2006 and their last album Danger Days: The True Lives of the Fabulous Killjoys in 2010. My Chemical Romance would later in 2013 be disbanded. Iero had previously in 2009 fronted for Leathermouth with the release of their album XO. However a year after the release the group was disbanded.

After the disbandment of My Chemical Romance in 2013, Frank Iero went into solo works. His first song was This Song is a Curse and also did an anti-Xmas track. He later did the cover of the song Be My Baby. All these songs were released under the record company Skeleton Crew. He had formed this company with his wife but later left the company. In 2013 collaborated with James Dewees on a gital hardcore project they dubbed, Death Spells. The two performed at the Skate Surf Festival in New Jersey and also a supporting tour Mindless Self Indulgence. The group would later release the single Where Are My Fucking Pills? Death Spells has since mid-2013 not been active.

He at this time acted solo with the release of new songs on his Soundcloud. He would later in December release the track, For Jamia as announced on the Twitter page a month before. Frank Iero had a record deal with Staple records in 2014 which was followed with his debut solo album Stomachache and also released the single Weighted later that year. The song was accompanied by a music video. Other singles released includes Joyriding. He had previously assembled a touring band and was working with them on tour.

The band toured the UK in 2014 as their maiden overseas tour and would in 2015 tour Mexico, the US and Europe. Iero in 2016 announced the recording of a new album which was followed by an Australian tour. Currently, the touring band is called frnkiero and the Patience. The band has since performed at Shadow of the City with 1975 in New Jersey and also played at the Riot Fest in Denver and Chicago in September 2016.

Frank Iero is married to Jamia Nestor, his longtime girlfriend on February 7, 2007. The couple has been blessed with three children, a twin, Cherry and Lily born on September 7, 2010, and a son Miles born on April 6, 2012. Iero is a pro-gay activist and has shown such support by wearing pro-gay marriage T-shirt on tour. He is a tattoo lover and has tattoos of logos of bands like Black Flag and The Misfits and several others.