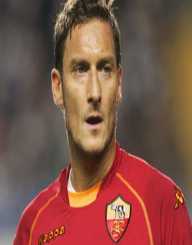 Francesco Totti, renowned Italian professional footballer, was born on 27th September 1976 in Rome, Italy. His parents were Lorenzo and Fiorella Totti. He started playing football as early as at the age of eight. His first football team was Fortitudo. Afterwards, he also played for Smit Trastevere and Lodigiani. He joined the Roma youth squad in 1989 after being spotted by its youth team coach, Gildo Giannini.

Totti also had offers from some of the most famous football clubs in Italy. He got a very attractive offer from AC Milan, one of the high profile football clubs of Italy. But his mother rejected the offer in order to keep Francesco in the hometown. His idol as a youngster, Giuseppe Giannini, was a former captain of Roma.

Francesco Totti played for Roma’s youth team for three years. His first appearance for Roma’s senior side in Italy’s most famous Serie A football league came at the age of 16. His first goal in the league was against Foggia on 4th September 1994. For the next three seasons, he scored a total of 16 goals for the outfit. His prolific goal scoring ability and also the quality to create numerous opportunities for scoring the same made him a regular in the Roma’s senior side. It was Mazzone, the team's Manager, who was very vocal praising his talent.

Zden?k Zeman succeeded Mazzone as the Manager of Roma. Under the guidance of Zeman, Francesco Totti developed himself as an attacking Midfielder. During the 1997 football season, Francesco was instrumental in creating a number of goal-scoring opportunities and scored 8 goals on his own. Roma managed to finish the season at the fourth position due to these performances. He was appointed the captain of Roma on 31st October 1998.

His debut game as an Italian National Footballer came in a qualifying round match of European Championship in the same year. In 2000, Francesco Totti scored two goals in the European Championship and was able to place Italy as runners-up behind the champion France. Under his leadership, his club Roma won the Italian league title in 2001. He contributed as many as 8 goals to the cause and brought the title back to Roma after eight years.

Francesco Totti’s career went downhill after his big failure in the Football World Cup of 2002 jointly hosted by Japan and South Korea. Italy got eliminated in the round of 16 by South Korea and Totti was unable to score a single goal. He led Italy in the European Championship of 2004 but crashed out in the first round itself. His on-field spat with a rival footballer of Denmark and subsequent suspension till the semi-final stage didn’t help the cause either.

However, he regained his form and his big moment came in 2006, when Italy won the football World Cup in Germany. His contribution towards achieving the coveted crown was immense. Francesco Totti retired from International Football in 2007 and did not play for Italy again.

The footballer Francesco Totti known for his buoyant goal celebrations, manages a diverse range of businesses comprising of the football training academy ‘Francesco Totti Academy’, a football camp for children with disabilities ‘Totti Soccer School’ and a motorcycle racing team called ‘Totti Top Sport’. He has also appeared in various endorsements, films and has lent his voice for an Italian dubbing of the television series ‘The Simpsons’.

Totti is a well-known philanthropist and was featured as ‘PaperTotti’ in a comic book, the proceedings of which were donated to charity. He coaches young underprivileged children and is the goodwill ambassador for UNICEF.

Francesco Totti married former showgirl and T.V. show host, Illary Blasi on 19th June 2005. The wedding of the "Italian Beckhams" was aired on television and the proceedings were donated to charity. A Roman Catholic by belief, the couple have 3 children – a son named Cristian and two daughters named Chanel and Isabel.