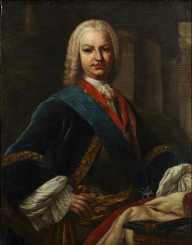 Jacopo Amigoni was born on 1682. He was a Venetian painter. He was well known for his representation of oil color. He started his painting career by painting mythological and religious scenes. He later progressed to painting gods in sensuous dreaminess or games. He painted portraits that he hardly enjoyed.

Jacopo Amigoni was born in 1682, in Venice. He started his career by painting mythological and religious scenes. He became famous and so while his fame grew towards the north, he began painting parlor works that depicted gods in aesthetic languor or games. His works inspired Venetian painter, Giuseppe Nogari. He also moulded painters such as Joseph Wagner, Antonio Zucchi, and Joseph Flipart among others.

In 1717, Jacopo Amigoni started working in Bavaria in Castle of Nymphenburg. He worked there until 1719 and then moved to the Castle of Schleissheim in 1725 and stayed until 1729. In 1726, he returned to Venice after working at the Benedictine Abbey of Ottobeuren. He painted ‘Arraignment of Paris’ which up to date hangs in Villa Pisani located at Stra. In 1730, he began working in Pown House and the Theatre of Covet Garden in England until 1739.

In 1736, Jacopo Amigoni traveled to Paris where he met Farinelli, a celebrated castrato. He later went to Madrid where he painted a self-portrait with a singer and his group. In 1739, he returned to Venice and toured Italy. He painted for Casa Savoi and Sigismund Streit. He was also tasked with painting several buildings in Venice. In 1747, he left Italy and moved to Madrid where he established himself. In Madrid, he became a court painter to Ferdinand VI of Spain. He also became director of the Royal Academy of Saint Fernando.

Jacopo Amigoni died on 1752, in Madrid. He, however, continues to live in his paintings.