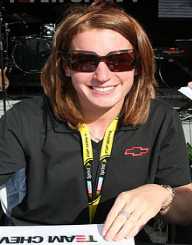 Erin Crocker was born on March 23rd, in 1981. She is famous for being an American race car driver. Similarly, she has garnered fame for being a television host with the Motor Racing Network (MRN).

Erin Crocker was born on March 23rd, in 1981. Her place of birth was in Massachusetts, United States. Right from a tender age of 7, Crooker began competing in quarter midget races. She performed well during her first attempt in the competition. As a result of her exceptional performance, she was acknowledged as the Most Improved Novice.

From 1993, Crocker began winning awards from the midget races that she was involved in. during this period, she continued competing while still undertaking her high school education. Later, in 1997, she competed at Whip City Speedway where she earned a name for herself for being the first lady to win in a race in the competition. Two years later, she also competed in the Eastern Limited Sprint Series where she was later acknowledged as the Rookie of the Year.

While taking lessons at the Rensselaer Polytechnic Institute in New York, Crocker launched her professional racing career. She graduated from the institution in 2003 earning herself a degree in industrial and management engineering.

Soon, in 2004, Crocker landed herself an opportunity to participate in Ford’s driver development program. She tested racing cars that were manufactured by the company. During the same year, she emerged as the first-everWorld of Outlaws driver to become a winner in a feature race.

A year later, Crocker joined Evernham Motorsports in a similar program to what Ford ran. Here, she participated in the ACRA Racing Series competition. She performed well as she was ranked among the top five in the race for three times. This season also gifted her with the opportunity of debuting in the National Association for Stock Car Auto Racing – (NASCAR).

Crocker tied the knot with Ray Evernham in August 2009. Evernham was her boss at some point in her racing career. The two welcomed their first born child in 2015.