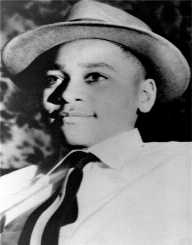 Born on July 25, 1941, Emmett Louis Till was a 14-year-old African-American who was brutally murdered for allegedly flirting with a white woman. This shameful and racial murder that happened in Mississippi was left to go unpunished as the perpetrators were acquitted. This created displeasure among the African Americans in the United States who were always subjected to such persecutions by their white counterparts.

This unfortunate incident happened when Emmett Till who was visiting relatives in Money, a small town in Mississippi Delta spoke to a 21-year-old married lady, Carolyn Bryant who owned a grocery store in the area. The two had a brief encounter, which has been reported in several versions.

Bryant’s husband Roy and his half-brother J.W. Milam, who were not around during the incident after several nights abducted Till from his great-uncle's house. The two, brutally mutilated and fatally shot him before dumping his body in the Tallahatchie River. After three days of search, his body was discovered in the river and retrieved. The sad killing of Till has since made him an icon of the Civil Right Movement.

Emmett Louis Till was born on July 25, 1941, in Chicago to Mamie Carthan and Louis Till. Louis Till was fond of abusing Mamie Carthan to the extent of choking her to unconsciousness. Louis Till was then ordered to stay away from Carthan by a court order which he kept violating. He was then given an option to either serve a jail term or enlist in the US Army which Louis Till chose the latter. He was convicted of rape and murder while serving in Italy by the US military court-martial and in 1945 executed.

With this, Emmett Till did not have both paternal and maternal upbringing. Emmett Till contracted polio at age six making him stutter. He moved with his mother to Detroit where she married Pink Bradley in 1951. Living all his life in Chicago, Emmett left Detroit to Chicago to live with his grandmother. His mother and stepfather later joined him. Mamie and Bradley divorced later.

Emmett Till had a spectacular physique, and at age 14 he had an adult look as he stood at 5 feet 4 inches and weighed 68 kg. Mose Wright, Mamie’s uncle visited them in the summer of 1955 from Mississippi Delta. He told Emmett wonderful stories about living in Mississippi Delta, so he decided to also visit him. Though he was supposed to be on vacation with his mother, he begged her to allow him to visit Wright in Mississippi Delta, which she agreed.

According to Mamie, she advised Emmett Till to be careful especially with the whites as living in South Mississippi was different from Chicago, which he responded in affirmative. Mississippi had a high rate of African-American lynching, and since 1882, over 500 of them had been killed in Mississippi alone with over 3000 of such killings happening in the South. To maintain the white supremacy, whites in the South were forbidden to have any interracial relationships. Blacks suffered high penalties even with a suggestion of sexual contact between a black and a white woman.


Encounter Between Till And Carolyn Bryant

On August 21, 1955, Emmett Till finally arrived in Money, Mississippi where he lived with his great-uncle Mose Wright and cousins Curtis and Jones. He and his cousins skipped church service on August 24 and joined other boys in the neighbourhood to visit Bryant's Grocery and Meat Market for candy. Roy Bryant and his wife Carolyn owned the Bryant market which served the local sharecropper. That very day, Carolyn was at the shop alone, and there have been different accounts of what happened when Till entered the shop.

An account suggests Till wolf-whistled at Bryant which according to a newspaper report was done to do away with his stuttering. His mother also said Till had problems pronouncing the letter b and may have whistled to overcome it as he was buying bubble gum. Other accounts suggest just as segregation was not intense in Chicago and blacks and whites easily mixed, he may have held Bryant’s hand and asked for a date or said "Bye, baby" as he left the store, or "You needn't be afraid of me, baby, I've been with white women before."

However, during the trial after Emmett Till's murder, Bryant testified that Till held her hands and said: "How about a date, baby?". According to her accounts, she freed herself but Till followed her to the cash registry, grabbed her waist and said "What's the matter baby, can't you take it?" and continued with  "I've been with white women before."

In an interview in 2008, Bryant admitted parts of her testimonies were false according to accounts of historian Timothy Tyson. Bryant who was stunned during the incident ran to his car to pick her pistol, and all the teenagers took to their heels upon seeing that. Bryant went ahead to announce the incidence to others and it spread like wild fire. Emmett Till and his cousins, however, refused to tell Mose Wright about the incident with the fear that they would be in trouble.

Roy Bryant who was on a trip at the time returned to hear of the incident and decided to hunt Till down. He was able to know Till lived with Mose Wright. In the company of his half-brother John William Washington also known as J.W Milam and Carolyn drove to Wight’s house at between 2:00 am and 3:30 am on August 28, 1955. All attempts by Wright to calm them down proved futile and they were able to get to Till at gunpoint.

Carolyn identified Emmett Till, and he was tied at the back of a green pickup they went with and drove towards Money, Mississippi. After dropping Carolyn home, they employed the services of two other black men and drove to a barn on Drew where they brutalised him until he fell unconscious. They then drove him to the Black Bayou Bridge in Glendora, Mississippi near the Tallahatchie River, shot him, and threw him in the river.

After waiting for several hours without Emmett Till returning home, Mose Wright unsuccessfully searched for him and reported the incident to the sheriff. Bryant and his accomplices were questioned but they claimed to have dropped Till at the Bryant store after the abduction. Bryant and Milan were arrested and search for Till began. His disappearance spread throughout Mississippi and many got involved in his search. After three days his body was found afloat in the Tallahatchie River by two boys who went fishing on the river. Till's body was disfigured but there were visible signs that he was beaten and tortured before his death.

Although racial murders and lynching were quite normal in South, Emmett Till's death and the circumstances in which it happened caught the attention of many who criticised it vehemently, and it was heavily reported in the media. Till’s mother Mamie, demanded his body be returned to Chicago for burial and prior to his burial, she insisted the coffin been opened for public viewing. The funeral was attended by thousands of people at the Roberts Temple Church of God in Christ and was buried on September 6, 1955.

Emmett Till's death trial gained international attention and several reporters from other countries arrived at the Tallahatchie county to report on the five-day trial. The trial, which was marred with several controversies, saw Bryant, and Milamgave their testimonies while Mose Wright and Mamie also testified. At the end of the trial in November 1955, the five-member white jury acquitted Bryant and Milam despite admitting they abducted Till. The jury claimed the prosecutors could not prove Till was dead and the body retrieved from the river was his. The judgment was met with fierce criticism both at home and internationally.