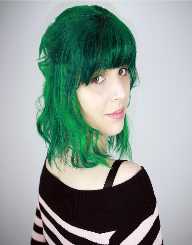 British singer-songwriter and YouTube vlogger Emma Louise Blackery was born on 11 November 1991 to Sheila and Michael Blackery. Her hometown is Basildon, Essex, England and she studied at The Bromfords School. A shy, timid child during her schooldays, Emma developed a penchant for music right from her childhood. Her interest in music was noticed by her parents who encouraged her by buying her music CDs of Michael Jackson and Madonna.

Emma attended the SEEVIC College and completed her graduation in politics. After graduating from college, she took up the job of a waitress.

At a very young age, Emma Blackery was fascinated by YouTube. She opened her first channel on the platform named ‘Pink Fluffy Hat Time’ and mainly posted music videos on the channel. The channel was so named because in most of the music videos Emma wore a pink fluffy hat which was bought by her father. She later closed down the channel and deleted all the videos. In 2011, while still studying in college, she opened her second YouTube channel titled ‘These Silent Seas’ which mostly consists of music videos.

Emma was not satisfied with her job as a waitress, and hence she decided to get back to the YouTube space in the year 2012. She created yet another channel named ‘emmaforthewin’ and started uploading many videos on the channel. The channel currently features only eight public videos and the most popular of the lot is ‘My Very First Dating (Rap) Video’ with over 280,000 views. It appears that Emma has privatized many of the videos leaving only 8 for public viewing.

Within a short span of time, the series of videos became immensely popular. But the popularity was short-lived as YouTube deleted the videos due to copyright infringement claimed by James’ publishing house.

Drawing inspiration from fellow vlogger Shane Dawson, Emma Blackery started focusing more on comedy vlogging. She devoted much of her time to creating and posting comedy vlogs and ultimately had to quit her job as a waitress. By the start of the year 2013, Emma had managed to capture many hearts, and her channel had over 30,000 subscribers.

Growing at a rate of 1000 subscribers per day, within a year, her channel had more than 500,000 subscribers. In 2015, Emma began collaborating with other artists and fellow vloggers to create more sketch-based videos. One of her well-known collaborations is with Nerd³ (aka Daniel Hardcastle). The duo is famous as ‘Demma.’

Blackery’s first EP ‘Human Behaviour’ was released at the beginning of the year 2012, before her current main channel was launched. She released the EP on her Bandcamp channel on 17th May 2012. Emma Blackery began writing and recording her second EP ‘Distance’ in 2013 and subsequently released it along with a music video for the song ‘Go the Distance.’

Within a week of its release, the EP peaked the iTunes charts securing a #1 position. The video has garnered over 1,000,000 views. Next in line came to her third EP titled ‘Perfect.’ It was released to the world on her 23rd birthday. The song ‘Perfect’ from the EP became the no. 8 songs on the UK Rock & Metal Singles Chart.

On 27th May 2016, Emma released her fourth EP ‘Sucks to Be You.’ Before releasing her EP, she had already launched the ‘Sucks to be You’ music video on her channel which garnered over 1 million views. All her EP’s were hits and established her as a leading YouTube vlogger and musician. Apart from EP’s, Emma keeps releasing her home song demos on her channel. On April 4th, 2016, she declared her decision of joining the pop-punk band ‘Busted’ on their tour ‘Pigs Can Fly.’

Emma currently has three active YouTube channels - her main ‘Emma Blackery,’ a gaming channel titled ‘BirdyBoots’ and a side channel ‘Vloggery.’ She has closed down or rebooted many of her earlier channels like ‘Pink Fluffy Hat Time,’ ‘boxesoffoxes,’ ‘LazyLittleMe’ and ‘EmmaFailsAtGaming.’ The talented musician is currently working on her fifth EP ‘Magnetised’ which is slated to release in May 2017. She also has her brand and sells caps, t-shirts, and badges through her website.

The quirky, witty musician and comedian has been featured on the list of ‘30 Women Under 30 Changing the World’ by Elle.

Emma Blackery’s life has never been a bed of roses. She has had her fair share of troubles which made her strong and determined. Emma’s parents separated when she was 12 years old. The leaving of her mother had a deep impact on her, and she suffered from depression during her formative years. Her father raised her single-handedly. After a few years, her mother came back in their life. Along with her, she brought two children, Travis and Febe. They were Emma’s half-siblings, but Emma bonded very well with them and considered them an integral part of her life.

The gorgeous and dauntless girl lives with her parents in Essex. In 2013, Emma Blackery began dating Luke Cutforth, and the relationship was made official in 2014 by Luke. Emma even moved in to live with Luke. But after three years of being together, they broke up in May 2016. The breakup was mutual, and the two continue to be good friends. She is currently single and wishes to keep her focus on her career.